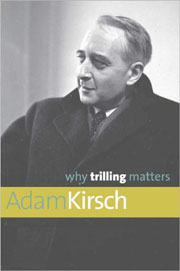 Last January in a New York Times Book Review special issue on the present and future of criticism, Adam Kirsch wrote, “Increasingly, I feel that argument is only the form of criticism, not the substance, just as passing judgment on a particular book is only the occasion of criticism, not the goal . . . The critic participates in the world of literature not as a lawgiver or a team captain for this or that school of writing, but as a writer, a colleague of the poet and the novelist. Novelists interpret experience through the medium of plot and character, poets through the medium of rhythm and metaphor, and critics through the medium of other texts.” Kirsch went on to advance a conception of “serious criticism” as that which shows “a mind working out its own questions—about psychology, society, politics, morals—through reading” and which therefore shows its audience “what reading can be: a way of making one’s self, one’s soul.”

Such a conception echoes that of Lionel Trilling, the literary and cultural critic whose legacy Kirsch seeks to defend in this recent volume. I say defend because the tone here is one of striking back, against a moment—or moments, as both Trilling and Kirsch identify their own contexts in this way—of “unliterary culture” in which Trilling’s example proves “so valuable, so heartening” because it demonstrates “what it means to define one’s self through reading, [and] proves that this kind of readerly heroism is always a possibility for those who believe in it,” regardless of how marginal or alone they may feel within that wider “unliterary” (or even anti-literary) society. The “heroism” of the individual and the individual’s will, along with an insistence on the literary as a privileged ground for making sense of the self and society, is what makes Trilling matter in the present moment, Kirsch argues. Trilling’s importance is not as historical artifact—of the New York intellectuals, the Menorah Journal circle, Columbia University as the ’50s turned to the ’60s, etc.—but as a defender of the primacy of literature, the importance of criticism, and, indeed, of the literary critic as heroic figure.

Such a conception—like Harold Bloom’s theory of poetry as always belated, struggling with the agonistic pressures of influence—is, of course, reflective of the conceiver’s position. Thus, Kirsch is quick to point to those moments where Trilling looks to critical work—Freud, for instance—as inducing the same pleasures as “a satisfactory work of art,” and he is particular tender on the charge “that Trilling was, at heart, not a great literary critic but a failed novelist, and therefore an unhappy, unsatisfied man.” Despite some solid evidence of frustration and even woe on Trilling’s part, Kirsch insists that Trilling’s experiments with fiction granted him “first-hand experience of what many critics do not understand: the tremendous will of the artist, and the moral dubiousness of that will.” Like Matthew Arnold, his model in criticism, Trilling’s career can be read “as a tale not of genius snuffed out, but of imagination tamed and made useful by conscience.”

So, in Trilling-esque fashion, Kirsch uses Trilling’s ideas and career as pretexts for his own investigations, giving us an extended reading of Allen Ginsberg’s “Howl,” thoughts on the Pirke Aboth and Jewish identity, and attention to Freud and Sontag and Whitman and Austen and the shift to the ‘60s and the task of the anthologist—all of which have their moments. Yet Kirsch’s defense of Trilling pales in comparison to one written several decades ago by Mark Krupnick,Lionel Trilling and the Fate of Cultural Criticism, a study that not only proceeds with more grace and accessibility and intensity than Kirsch’s but which also avoids the somewhat self-important focus on “heroism” in contrast with marginalization. Rather than mourning the moment as “unliterary,” Krupnick frames his work via the then-new “professionalization and specialization of criticism” away from periodicals and into the academy, with the related growth of a “new guild mentality” replete with fractured sectarian narrowness and baroque in-group jargon. Trilling, in contrast, “not only wrote well but wrote as a man speaking to men, not an academic specialist plying his trade,” as another social critic and Trilling aficionado, Morris Dickstein, put it in Gates of Eden: American Culture in the Sixties.

While Kirsch focuses on the “heroic” (artistic) will of Trilling—and, therefore, the critic in general—Krupnick, following a claim from Matthew Arnold on what criticism must necessarily be, sets his sights on the “undulating and diverse” in Trilling’s thinking, or what Krupnick terms Trilling’s “allergy to closure.” The critic who opposed “a sentiment of wholeness” of the self in contrast to the “weightlessness” of the modern world remained, resolutely, a thinker of contradictions, driven by and preserving, in his work, paradox. Consider his central notion of “moral realism,” which Krupnick calls “the imagination of complication.” Both Krupnick and Kirsch quote Trilling’s definition of this concept as “not the awareness of morality itself but of the contradictions, paradoxes and dangers of living the moral life.”

One irony of Trilling’s story is that while his mode of criticism, focused on a rather 19th-century notion of the self, fell out of favor in part because of the rise of literary theory, with its fetishization of apophatic language and insistence on fragmentary conceptions of subjectivity, Trilling’s insistence on complexity and paradox and resistance of closure echoes—albeit in a different vernacular—the investments and claims of Derrida and other poststructuralists. That “there is no possible way of responding to Belsen and Buchenwald. The activity of the mind fails before the incommunicability of man’s suffering,” is Trilling’s own observation, one which Krupnick reads as elucidating the postwar essays as responses to precisely such horror, via their focus on instances, in literature, of “moral realism.”

Kirsch says this awareness of the complications of morality “has the most immediate implications for both personal and political life; and Trilling argues that literature is uniquely able to teach it to us,” going so far as to call this recognition of contradiction a “homeopathic cure” for potential problems of liberalism, linked later with “the renunciation of utopianism and the sanctity of diversity.” Certainly some such awareness can serve as a useful antidote to political naiveté and various forms of zealotry, but there is something a bit reductive to Kirsch’s spin here.

In Kirsch’s kid-glove handling of Trilling’s notorious “we,” which has sometimes been read as condescendingly elitist, we see a complication to precisely this line that “complexity,” as Kirsch claims, somehow directly counters “utopianism.” “To enroll in Trilling’s ‘we,’” Kirsch writes,

is to enter into his experience, not to submit slavishly to his judgments; the commonality it expresses is provisional and literary, not sociological. Properly understood, it is a humbler form of address than if Trilling were to write ‘I,’ which would turn him into an authority handing down judgments, or to write in the third person without addressing the reader at all. His ‘we’ is an improvised, and sometimes clumsy, attempt to make his writing about texts as involving as other people’s writing about characters and plots.

Krupnick, more directly, states that Trilling is constructing “a counterhistorical ideal community, a society that did not in fact exist,” while Kirsch says elsewhere that Trilling “felt a need for the reassurance and community that only criticism can provide.”

In short, the “we” of Trilling’s essays is not some pie-slice of New York intellectuals or readers of a certain journal at a certain moment in time, but, rather, an inclusive second-person persona predicated on the hope of transhistorical community, including Matthew Arnold and Edmund Wilson and other critics long-dead and not-yet-born. This deferred dream we is utopian, an imagined, ideal community that does not yet exist. Likewise, Kirsch’s relentless focus on the “heroics” of the critical act, standing brave against the swarming tides of “unliterate” contemporary culture, has a bit of the utopian to it as well.

Ultimately, Trilling may only matter to the extent that a given reader finds herself included in that “we,” or at least appreciative of the emphasis on complexity and Trilling’s implied canon of great works. This audience may be limited, but it is sure to always include critics—critics who, in praising Trilling, portray him, to some extent, in their own image.