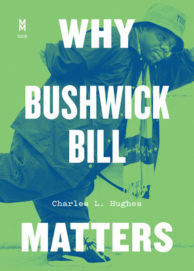 Richard Shaw was born in Jamaica, raised in New York, and, after graduating from a Minnesota Bible college in the mid-1980s, joined other family members in Houston. At the time, New York’s status as hip-hop’s cradle and epicenter was scarcely threatened, though a few artists, such as Philadelphia’s gangsta-rap pioneer Schooly D and Miami’s 2 Live Crew, were creating models for the regional scenes that would soon flourish and spread out from LA and elsewhere. Shaw’s New York upbringing—hence the nickname Bushwick Bill—and breakdancing chops earned him authenticity points in the burgeoning Houston hip-hop scene; here was a talented b-boy who had learned his moves in situ. Bill, who was born with dwarfism, also attracted attention—not always welcome—for his size. He was asked to join Rap-a-Lot Records’ signature group, Ghetto Boys (later rendered as Geto Boys), first as a dancer, then as a rapper. Willie D, one of the group’s cofounders, recognized early on both the talent and novelty Bill brought to the group. “That would be some trip shit,” as he put it, “to see a midget rap.”

As Willie D’s insensitive brainstorming indicates, Bill’s career in spots rehearsed the long-established and dehumanizing ways short performers had historically been presented to the public. But in Why Bushwick Bill Matters, historian and critic Charles L. Hughes argues that Bill’s work “bum-rushed the freak show.” Though several of his famous early verses were penned by other members of the group—sometimes based on interviews with Bill—Bushwick Bill’s voice was singular, and he was eager to defy ableist stereotypes. His first Geto Boys showcase was “Size Ain’t Shit,” a salvo against doubters and a lovemaking brag in which Bill performed, Hughes writes, “the exaggerated masculinity that was common in gangsta rap through a body type often coded as sexually unappealing or nonfunctional.” Hughes doesn’t apologize for the song’s sexism and homophobia, but he amplifies its importance not only as a prominent work from the perspective of a short person but moreover from a “short person who doesn’t give a fuck what you think about it.”

Most gangsta-rap narratives are indebted to crime film; often and influentially, Geto Boys also borrowed devices from horror films, sometimes showing how scenes originally depicted in image can be even more shocking in language. Eventually, Bill would take on an alter ego, Chuckie, lifted from the 1988 film Child’s Play. In playing this role, Bill countered commercial depictions and everyday perceptions of short people as cute while at the same time reviving associations between shortness and perpetual childhood, as well as between physical difference and monstrosity. Hughes, who is short-statured himself, is deft at navigating this sort of multivalence, expert at interweaving music criticism, cultural history, disability studies, and a touch of personal reflection.

Hughes is well-studied and acutely informed on race and music. Unsurprisingly, his analyses of Geto Boys’ tracks are far more nuanced than the discourse that typically surrounded them in the ’90s, when they were condemned by politicians who pretended not to recognize their obvious fictional modes and defended by fans who overlooked the perniciousness of misogynistic lyrics. Hughes is especially helpful in contextualizing the insanity motif that runs through Geto Boys favorites such as “Mind of a Lunatic” and “Mind Playing Tricks on Me,” the latter a poignant depiction of criminal paranoia as well as, more generally, Black anxiety in a racist and ever-dangerous country. Though the Geto Boys’ lyrics were works of fiction, Bill struggled with mental illness in real life. Drunk, high, and depressed one night in 1991, he entreated his girlfriend to shoot him. In the altercation that followed, he shot himself in the eye. The traumatic hospital visit that followed was photographed—without Bill’s permission—and used as the cover of the Geto Boys’ album We Can’t Be Stopped.

In addition to going into depth on Bill’s most remembered creations, Hughes works through the lesser-known parts of his catalog, such as the solo gospel album Bill made in 2009. (This turned out to be his last release; he died of pancreatic cancer in 2019.) Hughes draws on his own experience infrequently, but his memoiristic passages and heartfelt tributes to his subject are well-wrought and illuminating. “Living as a short person,” Hughes writes, “I confront a world that wasn’t built for me and is continually disrupted by my presence. . . . whether or not we work as performers, those of us who are perceived as disabled live our lives on stage.” A sentence later he goes on, “Bushwick Bill has given me a booming soundtrack for my attempts to navigate that world and survive that hypervisibility. In his defiance and joy, Bushwick Bill remains a role model for me in how to live as a short person in all its messy complexity.”