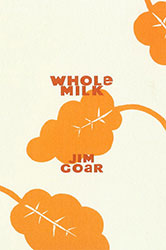 Jim Goar’s Whole Milk proves that Grade A, vitamin-rich poetry doesn’t need to come in a fancy package to be enjoyable—and honestly, who doesn’t prefer the simplicity of a half-pint carton over those plastic, color-splashed, non-biodegradable Chug bottles? This plainspoken surrealist fairy tale could be a lesson in matter-of-fact nightmares, replacing Mother Goose with a bird flushed from spending too much time at the bar. Part dark Western, part Lemony Snicket, it’s the kind of story Russell Edson would tell his children before bed and has plenty of stark, black-and-white drawings by Josh Rios to make the experience authentically disturbing.

Goar echoes Edson’s vintage id-twisting logic as he populates his Texas-Iowa-Disneyland with a menagerie of trespassers, including a genitalia-nesting bird, an elephant who lives under his house, a pianist with an itchy trigger finger, and a horse that is more Che Guevera than Mr. Ed. His clause-free declarative sentences are a perfect match for the edgy grade-school surrealism which guides us into emotional revelation:

I’ve forgotten how to serve a cloud and ask the bird. It flies away. Worthless drunk. The cloud begins to burn. I begin to panic. I try to remove it. It falls through my spatula and into the fire. I feel I’ve committed a great sin.

The motion is distinctly downward. As we float like tumbleweed across sections titled for their anthropomorphic characters, one gets that sinking kind of feeling. We descend further into the fear-fraught, lust-ridden, fight-or-flight impulses of Goar’s psyche—or possibly ours. The recurrence of falling autumn leaves and animals unable to fit within human spaces and situations adds to the work’s Freudian resonance. The outcome is one of wreckage, legal trouble, and personal upheaval, and lacks any satisfying answers. Or at least, it wisely sacrifices them for uncomfortable, funny moments:

When I learn that Dumbo is showing again I know there will be problems. I warn the elephant. It pays no heed and sees the flick. Two days later it builds a nest. The neighbors complain. I bake them cookies.

His factual style allows Goar a nervous distance between himself and his subject matter, as though he were an observer to his own dream. In a way, the book is like a controlled case of delirium tremens, or a slightly longer version of the boss-poisoning sequence in the film Nine to Five, where Lily Tomlin becomes Snow White and is surrounded by her “helpful” little animated friends. We wonder, just how close is Goar’s speaker to the red-faced bird, the squatter elephant, and martyr of a horse? Are they his saviors, or the self-imposed banes of his existence?

Symbolic ambiguity and metaphors for transition abound, but they crop up in an absurdly entertaining fashion. Goar’s world (thankfully) has broken its agreement with reality, but still, we want things to turn out all right. We want Cinderella to get to the ball. He keeps us outside looking in the whole way, and the last act of Whole Milk is certainly a less-than-neat, smoke-filled denouement. This could have easily been a longer dance through a house of mirrors—but then again, we wouldn’t be able to slip it into our shirt pockets and secede from ourselves on the long train ride home.