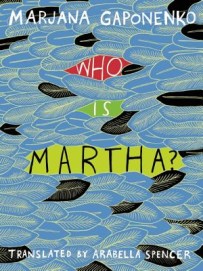 When 96-year-old misanthrope Luka Levadski comes face to face with a terminal illness, he decides to skip out on treatment and spend his last days in luxury at Vienna’s most prestigious hotel. Winner of the 2013 Adelbert von Chamisso Prize for a work whose author’s native-tongue is not German, Ukrainian author Marjana Gaponenko’s promising second novel Who is Martha? succeeds as a deeply compassionate meditation of one man’s life and its impending finality. Amusingly digressive and philosophically rich, Gaponenko uses her protagonist’s death sentence as a backdrop for a hallucinatory sojourn amidst Vienna’s finer pleasures. As Levadski, whose “social aptitude has been withering away for decades,” indulges himself in expensive clothing, fine dining, and beautiful music, he unexpectedly befriends his butler and another aging hotel guest. At times hilarious and others soberly introspective, Who is Martha? poetically balances its protagonist’s hardened misanthropic sensibility with a life-affirming optimism. Gaponenko’s comfort with the German language is on full display as she confidently narrates in free-indirect speech, seamlessly guiding the reader between the narrative and Levadki’s inner hallucinatory thoughts. It’s a strong second novel for Gaponenko, who at just thirty-four, remains a serious young talent and someone to keep an eye out for in the coming years.