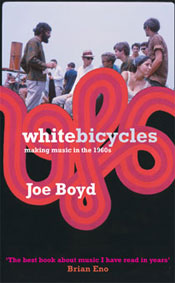 At times it seems as though revisionist history is set on reducing the 1960s to a sum lesser than its parts—a sort of bubble of colorful utopian idealism that gently rose on the marketable precepts of flower power, psychedelia, Woodstock, and the hippies; lost altitude with the deaths of Robert Kennedy and Martin Luther King Jr.; and eventually popped in the wake of Charles Manson and his “family,” the grim debacle that was Altamont, and the disaster of Vietnam. But whether you were there or not, on the bus or off, and despite what you may or may not remember, the ’60s were a decade of unprecedented change not likely to be replicated again. Several recent autobiographies and memoirs have done well to debunk the alleged irrelevance of the era, but none so thoroughly and elegantly as Joe Boyd’s White Bicycles.

The decade had many focal points—political, cultural, and otherwise—and certainly the music was one of the most salient aspects and left the most lasting legacy. At the center of this creative and enriching vortex was the young American Joe Boyd. Born in Boston in 1942, Boyd and his brother grew up listening to old blues and jazz records and obscure radio shows, and were heavily influenced in their musical perception by a gift from their grandmother—the RCA Victor Encyclopedia of Recorded Jazz—as well as Chris Robertson’s late-night jazz and blues show on a Philadelphia radio station. In 1960, Boyd and his brother booked and promoted their first show with Lonnie Johnson. The show was a small success at best, but Boyd experienced a sudden revelation that proved to be much more valuable: “Fats Domino is descended from Jelly Roll Morton. Rock ‘n’ Roll is the blues! Popular music is the same stuff I listen to in my room all the time, only newer. I can be a record producer!” And thus Boyd embarked upon his remarkable career.

In 1964, at the age of 21 and recently graduated from Harvard, Boyd brought Muddy Waters to England as part of the Blues and Gospel Caravan, which also included Sonny Terry and Brownie McGhee, the Reverend Gary Davis, Sister Rosetta Tharpe, and others. The following year, Boyd was at the Newport Folk Festival, stage-managing Dylan’s legendary coming out as electrified proto-punk rocker. Back in London, Boyd’s first official recording session in the capacity of producer was for Eric Clapton’s Crossroads. He then went on to produce Pink Floyd’s first single, and they soon became the house band in Boyd’s UFO Club, the psychedelic Mecca he ran with John Hopkins in the heart of swinging London. Following his intuition about the genesis of popular music, Boyd then went on to help engineer the fusion of pop music and British folk, founding, managing, and producing the likes of the Incredible String Band and Fairport Convention. He discovered, produced, and managed Nick Drake, and on a trip to Stockholm in 1970, he was impressed by some Swedish songwriters he heard—two years before they became ABBA. Boyd eventually went on to produce soundtracks for Deliverance (his only “hit” as a producer) and A Clockwork Orange. He also produced the definitive documentary on Jimi Hendrix, as well as the film Scandal. In 1980 he started Hannibal Records, which he ran for 20 years.

Boyd’s lucid and engagingly written memoir shines for several reasons; he refuses to rely on any sort of rose-tinted reductionism or recycled gossip; his dry, straightforward account avoids all hyperbole and yet is underpinned with a wry sense of humor; his uncanny memory and detailed character descriptions ground his narrative with a sold sense of detail, an amazing feat for someone who has survived such a nebulous and mind-boggling epoch. Boyd always seemed to be at the right place at the right time, but, despite his knack for sniffing out the next big thing, he was never able to cash in on his many talents: most of his discoveries were snatched up by the corporate combine in merciless power plays. Nonetheless, Boyd neither indulges in bitterness, nor does he grind any axes, but neither is he afraid to question the critical/sociological aspects of what the “rebellion” was all about: who was rebelling against what, and how it created the fertile context for the sort of experimentation that resulted in one of the most prolific eras in modern music. (There’s also an excellent CD available with the same name, on which Boyd has collected various rarities and B-sides and oddities from many of the artists he produced and worked with.)

So impressive is Boyd’s account that one is left wondering how he managed such a marvelous feat, for which he provides the following explanation: “And as for me, I cheated. I never got too stoned. I became the éminence grise I aspired to be, and disproved at least one sixties myth: I was there, and I do remember.”