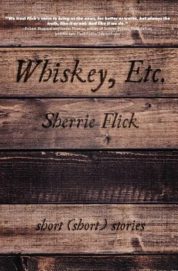 Author of the 2004 chapbook I Call This Flirting (Flume Press) and 2009 novel Reconsidering Happiness (Bison Books), Sherrie Flick has been steadily mining her own past and the sometimes buried pasts of others. Her new collection, Whiskey Etc., offers readers only those slices of the whole picture that Flick wants us to receive. Like certain dishes, only certain ingredients are prominent and there’s much beneath. Perhaps most powerful is the pulse, constant throughout all of Flick's work: the pulse of waiting for something, of having that slight weight in your chest and heels, helium in your head.

Flick’s characters often seek wildness, even if only as a respite from domesticity. In “Breakfast” she writes, “The chickens scratched quietly in the yard. Mother and Evan had only the smell of fresh-brewed coffee. They had only the noise of Evan’s TV in the den. . . . Evan’s thin voice carried like tangled yarn down the hallway. Mother sighed and raised her hands above her head, beseeching some otherworldly power. She leaned back in her chair until her fingers touched the yellow wallpaper.”

At other times, Flick channels the specific brand of nostalgia that’s dreamt up when you’re young. The main character of “All Night Long” finds herself in this mood in her favorite bar: “She’s here to drink, to inhale the smoke and sweat, to relive a life or two she’s left behind.” Flick is in her late forties, yet in these stories she reveals a deep caring about the moments of one’s early twenties, a viewpoint hard to come by. Many dismiss this slim pocket of early adulthood as an experimental, frivolous time. Flick argues it is that, and a lot more: a fiery introduction to diverse worlds and magnified emotions.

Occasionally the collection departs from its main theme—as in the humorous story “Heidi is Dead,” about friends telling “dead- and nearly dead-dog stories late into the night.” No matter the tone, however, Flick’s facility with flash fiction transforms her subjects into Herkimer diamonds. The heart of her work is never hidden, merely sometimes lost in the middle of a sticky morning or a slow afternoon, “these days so long and wide, you need a compass just to pass through them.”

Perhaps Flick’s talent is best exemplified in the fierce story “You Have a Car,” a tale that feels like a conclusion and a beginning at once: “Assume you have a car. It’s blue. Get in. You want to drive west; you start the engine. You brush your hair and apply lipstick. It’s red. The brush, black; your hair, blond.” Here, via expert use of the second person, Flick brings us to ourselves: “You are only lit by the scattered drops of rain, by the sad distant motel signs, by the single red ash on your drooping cigarette. You will hear a train in the distance and you will know there have been real reasons to not understand just a few things. You will know surely this is what momentum becomes.”

Flick’s work is adamant. It points to having the strength and stupidity to ignore advice. To see your own and someone else’s beauty. And then to get in your car, slam the door, and drive toward something else, or just away.