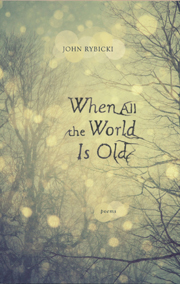 John Rybicki’s latest book of poems, When All the World is Old, is an emotional sequel to his previous collection,We Bed Down into Water (TriQuarterly Books, 2008). If that previous book was the fire searing the poet’s soul in the wake of his wife’s death from cancer at age twenty-nine, then When All the World is Old is the ash he stirs and sifts in search of a means of moving on. Or, at least, the collection suggests that its author has hope for a life that is once again tranquil. This hope, articulated through tight, elegant verse and imaginative prose, suggests that the poet is in fact on the threshold of healing.

Much of the book exists in a place of memory. The poems are often narrative, capturing a moment of tenderness or joy between the husband and wife in the months leading up to Julie’s death. The scenes and images are those of hospitals, beds, chemo tubes. The antagonists are the cruel lumps at the back of Julie’s neck and the waning time the “Dame” and her “Dude” have left in their “One body, really, like you dream about.”

For Rybicki, Julie created a kind of earth, one he says he would “straddle” to reach “far-flung ends of the compass, / tugging red and yellow and orange thread / out of living things, weaving them about my love’s wrists.” Theirs was a place of joy and protection from which the poet is now a refugee. In a poem titled “I Flew Out to You Through Bone Timber,” Rybicki makes his plea to return to that state of happiness: “Disassemble this flesh to morning dew / so I can seep into the earth and come home to you.”

Rybicki operates comfortably in quatrains and couplets as well as prose poems. One of the most interesting of the latter is “Quarter,” in which the speaker imagines himself “swimming inside silver,” the coin he has picked up off the street. In this dream, the speaker tries to save a mother and her son from a house submerged inside the coin. The son fights the speaker off with drumsticks. And the mother refuses to come, remaining to “fold the T-shirts and blouses and blue jeans floating all about the room.” The final sentence suggests Rybicki’s concerns for his own adopted son after Julie’s passing: “Sometimes I hear the boy drumming inside my pocket, drumming his little sticks in George Washington’s head.” When he chooses to employ prose, Rybicki switches briefly from his role as writer of songs to that of a storyteller. He has a mind and ear for an almost surrealistic fiction, one that serves as a means of distraction from the “conventionally” formed poems that possess the bulk of his pain and sadness.

Other interesting formal moves include the poet’s references to poems that appeared in his collections Traveling at High Speeds and We Bed Down into Water—specifically “Tire Shop Poem” and “Tire Shop Poem Revisited.” In his previous books, Rybicki explored his occasional work as a tire shop crew member as a kind of experienced meter, a lived rhythm shared by a team of persons repeating a very mechanical work. In his first two books, that sharing behaves as a microcosm of the poet’s ideal for social interaction—depending on one another to produce something beautiful. However, in When All the World is Old, a new layer of dependency is added into the tire shop poems, a need to share one’s personal sorrows with friends. The relationship becomes more than a system of rhythms; it becomes a forum for externalizing personal fears and frustration among those who “say the unsayable when we smash our palm meat against rubber.”

What is most beautiful and thrilling about this book is its fourth and final section, one introduced by a tender line from the writings of Rybicki’s late wife, who was also a poet: “Dude, if you’re reading this and I’m gone, you are my world.” The poems here are especially lyrical. They invite the prediction that Rybicki is preparing to depart from the highly literal and narrative meditations of a widower—a state he has been inhabiting for two poetry collections—and enter a kind of writing that is more interested in metaphor, in imagined planes of being. The pieces converse with the spiritual, as well as with Rybicki’s attempt to consider himself as a dynamic, poetic figure capable of evolving past sorrow rather than dwelling on the conditions of mourning that inspired the first three movements of the collection.

The poems here are prayers, testaments, and vignettes of a man’s sorrow as a destroyed version of a former self. They obsess on loss as a state of being, as an elemental condition to which a person, especially a person who is also an artist, is subjected. The work not only meditates upon the humanness of living with loss, but also the impact that loss has on creative output. More so through example than through discussion or theory, the poems begin to realize that they need to take on new aesthetic characteristics in order to transcend their lament. And in this sense, Rybicki has very much left his reader both curious about and confident in the tonal differences, aesthetic experiments, and, importantly, the subjects that the poet will explore in future work.