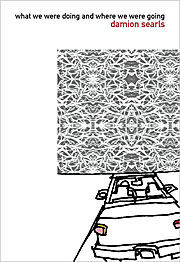 What We Were Doing and Where We Were Going, Damion Searls’s first book of fiction, is remarkable for its humor, its erudition, and for what it does with existing literary texts. The short stories in this collection feel utterly new, yet revisit and refresh classics of the form, including works by Hawthorne, Nabokov, and André Gide.

This isn’t too surprising for an author who has translated works by Proust, Rilke, Thomas Bernhard, and others, but Searls’s linguistic facility is also on display here in the form of neologisms and multilingual puns. Though Gary Lutz got to the word “extracubicular” first, the following passage from Searls’s “Goldenchain” is without precedent: “Thrown-on hand-me-downs come together into a look, a neodisjunctivist style all their own.” Punning occurs when a husband and wife at the end of their marriage consult “Dr. Anfang” (der Anfang is German for “beginning”) and when an artist named Otto introduces his “newest project, an alterego of John Cocteau named John Cockwater.”

Each story in Searls’s collection is told in the first person, and contains at least one writer, whether actual, former, or aspiring. The narrator of “The Cubicles” declares “all of this is fiction,” “my similes drift, I notice,” and dreams of writing “on the side, some day, as a hobby.” In “Goldenchain” a man “recover[ing] from [his] marriage” encounters an exhibit of Ethiopian healing scrolls, decides to write about them, but is unsure which form to pursue: “a review, an essay, maybe even the novel I still wanted (and want) to write, or at least a short story.” “Dialogue Between the Two Chief World Systems” features a character writing a dissertation on the same five works of fiction from which Damion Searls drew inspiration for this collection.

Such frequent intertextual games and self-referential asides would distract, if they weren’t accompanied by Searls’s exquisite prose. Consider, in “56 Water Street,” a passage concerning a great blue heron: “Slowly, deliberately, it takes off. A coat tossed onto a coat rack, limp and loose, became a gray sail, swelling with the wind.” Or this description of a cemetery for British soldiers near the Puget sound: “Now they overgrow their own gravestones in a strange grassy grove on the hillside, enclosed in a white picket fence and a humming scent the transmuted young men release into the air themselves.” Searls also engages both high and low culture, with paintings of angels “more like Klee’s than Hallmark’s” and references to Chaucer, Henry James, Dr. Seuss, The Far Side, corporate-speak, and more.

The collection as a whole succeeds because it absorbs accepted classics, riffs on them, and then progresses into uncharted territory. For example, Nabokov’s “A Guide to Berlin,” with five short sections and a discussion of the responsibility of literature, lends its form to “A Guide to San Francisco.” The latter depicts a man in an underground office, in “the other parallel city a dozen feet below, not above, the streets of San Francisco,” creating “a three-dimensional model of the underground.” The narrator states, “I feel that this is the only sense of art: to create an inner universe we prefer to the other one.” With What We Were Doing and Where We Were Going, Damion Searls has accomplished such a feat.