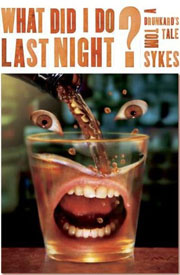 In What Did I Do Last Night?, Tom Sykes recounts a classic tale of a rise and fall and rise again. Though a basic plot synopsis would lead you to think the story somewhat simple—man beats alcoholism—it is far from the truth. The originality that brings this memoir to life stems from humorous and blindingly realistic narratives that map out all the dos and don'ts of drinking. Do: Become a reviewer of New York City nightlife, all expenses paid. Don't: Sleep in a gutter while waiting for a seedy bar to open.

The book follows a chronological timeline, from Tom Sykes's first beer in a pub to the moment he decided never to drink again. We follow Sykes as he gets drunk at school, works at a strawberry field, and drinks beers with a man slaughterer. This takes us through the greater part of England, thus giving a tour of one of the most proficient drinking cultures in the world. We then head to New York where Sykes gets a perfect/disastrous job as the New York Post's nightlife reviewer. The vivid binge drinking descriptions breach the paradox of clearly portraying nights that were muddled by alcohol, weed, and coke.

Showing the pros and cons of the popular drugs of the time, Sykes displays ecstasy's beauty and danger, pot's enhancements and laziness, coke's festiveness and addiction, and alcohol's grand party and strangling grip on one's life. The end of the book feels like a close escape from a disturbing potentiality. Sykes has the uncanny ability to make the reader feel like a drinking pal during the good times and afraid for him as he deteriorates; we empathize and are still aghast when he says things like "I can't say the proudest moment of my life was frantically trying to sniff a few grains in the hospital bathroom before I went in to see Alice, Floyd, and their new daughter."

Sykes is a great raconteur, and he recalls many unbelievable stories that invigorate the reader—though whenever he tells a less remarkable story, the reader feels unsatisfied. Amazing or dull, however, collectively the stories leave us with a well-rounded version of Tom Sykes. What Did I Do Last Night? takes the reader into a life of indulgences and redemption. We feel the highs, the lows, the buzzes, and the hangovers in stunning detail and see the world through the bloodshot eyes of a drunkard.