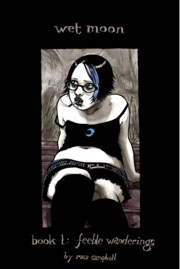 A white woman in her early twenties, extremely thin, pierced, tattooed and with a Chelsea cut, kneels with her feet tucked under her and begins to pull her shirt over her head. Her back to us, she looks over her shoulder, aware of being watched, the expression on her face a narrow-eyed provocation. An African-American woman of the same age, her head shaved, a cigarette held to her pierced lips between two fingers, sits outside in torn tights and a small, revealing camisole. Her hand rests on her upper thigh and she looks just over our heads with a look of pensive and fretful desire.

These two portraits appear on the title pages of the chapters that divide up Sophie Campbell’s ongoing series of graphic novels Wet Moon. I invoke them not to be lurid, but rather to enter the discussion the text seems designed to provoke about the various pushes and pulls of gender and genre, the personal and the political. Wet Moon, like the portraits that move us from one chapter of the narrative to the next, involves its readers in a delirious regress of identification and objectification. 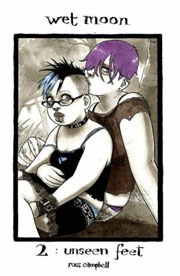 The series follows the lives of a group of mostly female college freshmen in the town from which the series takes its title, a locale combining the seedy, starved worldliness of the isolated college town with the grand and corrupted glamour of the Southern Gothic setting. Our heroines’ cultural coordinates, indeed, incline toward the Gothic in all its modes, including the High Romantic literature assigned in their classes as well as the live performances of bands like Bella Morte, whose lyrics often furnish epigraphs to the chapters. These allusions remind the reader that the Gothic, since its late eighteenth-century inception as a reaction against the rationalization of industrial life, has always served as a means for artists and audiences to escape the rigidities of the gendered and sexual binaries enforced by the same technocratic regime. From Mary Shelley’s artist-scientist and his tragic monster and the Brontë sisters’ male demon lovers all the way to Stephen King’s vengeful women and the hardcore cyberpunk heroines of William Gibson’s decadent future cities, we see that authors who work in or around Gothic Romanticism have always taken the genre’s lack of realism as a license to imagine themselves inhabiting not only other subjectivities, but also other sexed bodies and other forms of desire. Campbell partially follows in this tradition, but the joy of Wet Moon is to watch her combine it with a wry social-psychological acuity that short-circuits the occasionally self-important intensities of romantic art.

At any given moment, Wet Moon seems ready to launch itself into a rollicking plot: dire secrets will be divulged and life-changing events will transpire! The main protagonist, Cleo Lovedrop, is a hapless magnet for intrigue: unbeknownst to her, her ex-boyfriend is dating her sister, while at the same time someone posts harassing messages about her in Wet Moon’s public places and her new girlfriend Myrtle exhibits worrying signs of murderous pathology. Her sister, moreover, works in a large mansion outside of town for a wealthy woman with one arm, who seems to have strange designs on her young employee. Add to this the FBI agent hanging around town with his monkey and you have the makings of an unputdownable airport paperback. 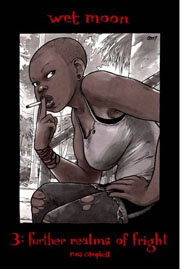 Campbell, however, uses the expansive freedom of the graphic-novel format to demonstrate that plot is the least interesting aspect of any extended narrative. While the elements summarized above give Wet Moon a spine of story, the real interest lies in the meandering, often uneventful lives of Cleo and her extended circle of friends. They spend most of their time in conversations—depicted, in their informal, vernacular drift, with a kind of anti-romantic ultrarealism. The women discuss everything: their own ramifying relationships, the subcultural objects that inform their tastes, their future plans and sexual desires. Campbell has been lauded by fans for her depiction of a multiracial cast of female characters who display a broader range of physical and psychological types than one normally finds in popular media. The extended cast includes the exuberant punk and self-hating Trekkie Trilby, the kind but indiscreet Audrey, a blogger named Mara who is beginning to question her old friendships and lifestyle, and the aforementioned Myrtle, Cleo’s charming, intelligent, but possibly disturbed girlfriend.

While the fourth and most recent volume of Wet Moon ends with a violent assault and suggests that future episodes may force confrontations and revelations on the characters, the pleasures of the series stem more from the diverse company of the characters, whose psychological plausibility and complexity of intention mirror the dense network of real-life interactions which the artificialities of Gothic plot might falsify. Campbell has bravely committed herself to mixing genres, but the possibility that the over-the-top romance will overcome the intricate social and psychological novelistic realism with which she has limned her characters’ personalities remains, one suggested by the gradual migration of Campbell’s drawing style from the observant realism of the earlier volumes to the manga-inflected stylizations of recent episodes. 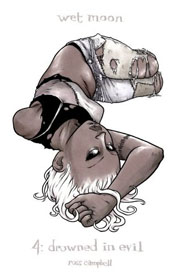 Wet Moon’s genre-bending returns me to where I began this essay, with the question of where identification ends and objectification begins. It cannot be denied that the portraits of the women that head each chapter function as pornographic pinups, just as Campbell’s encyclopedic depictions of sexual fetishism (leather, body modification, ephebophilia, costume play, etc.) enjoin us to wonder what kind of pleasure these books are meant to provide and to whom. The eternally relevant ethical commitments of feminism might militate against viewing Campbell’s identifications with, and realistic transcriptions of, the lives of her heroines as serving a positive political end, whether in romantic or realist mode. Sexualized power, as many feminist thinkers have observed, is often a consolation offered by patriarchy for the powerlessness it enforces on women and other minorities in the political and economic spheres.