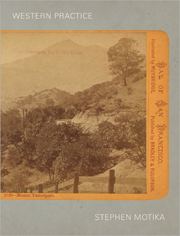 Stephen Motika’s first full-length collection, Western Practice, sets itself firmly at the edge of a tradition of Western American innovation: the book’s two sections begin with epigrams by Lyn Hejinian and Leslie Scalapino, the poem “Night, in the Oaks” is dedicated to David Bromige, and early on appears a long majestic poem about the great innovator / composer Harry Partch, who created the microtonal scale and lived a peripatetic, cosmopolitan hobo / bohemian life (including an encounter with Yeats), which Motika maps beautifully in “Delusion’s Enclosure: On Harry Partch (1901-1974).”

One of the many pleasures of Western Practice is the honor Motika, who was born in Santa Monica but now lives in New York, pays to his claimed antecedents and lineage, creating nothing short of a history of the “outside” artist in the American West and western hemisphere: Raymond Chandler, Art Pepper, Ginsberg / Kerouac / Cassady, Yves Klein, Ed Keinholz, David Hammons, Allan Kaprow, John Cassavetes, Sophie Rummel and “Duchamp in gracious-ladied Pasedena” are just a few who find mention in “City Set: Los Angeles Years.” In this long poem spanning the history of art activity in LA from 1955-1977, Motika displays a humility before the practice of his forebears:

The title “Western Practice” comes to mean not only an artist working on the fringes, but also quite literally outside: outdoors. The Harry Partch poem ends: “I went outside. I’m still going outside.” Throughout the book the natural world is as strong and wily a presence as anything happening indoors, a given of life in California:

the scene was in the center of the road; I left it & sat on the curb.

the currying of fruit picked from trees, passion fruit vines spilling through the window.

the words of our mouths.

Part of the thrill of the read is watching Motika, out of this formidable treasure trove of antecedents, set off on his own course, which he does starting on page one, shifting registers of tone and intent and locale as he dives into several layers of consciousness:

early hour, resistant to time, an arrival. people out of rooms and gathered, four now, to eat. with florist at table, a dining out & bowl of dahlias.

expect to be nervous in the beginning.

I meant to burrow under it and sleep.
(from “Night, in the Oaks”)

The book opens to a series of poems that feel mapped, scattering across the page like newly discovered tide pools made with an athleticism and grace and sometimes hard-edged juxtaposition in which one experiences a kind of sifting for gold / sensuality / thought in a work that clearly grounds itself in a love of body (both physical and aesthetic) and texture. In “Near Los Osos,” we read:

In Motika’s practice, the page is the measure, or canvas, or scored-up sheet music he teaches us to scan or read or trust as if we are going on a difficult hike with an experienced hiker. An excavator, archeologist, paleontologist, cartographer, poet interested in linguistics and representation—in how things might look and say—Motika stays true to his interest in practice, in the processural, both in art and in life, making a poetry where we can “crawl inside & lie down against the future” in a world where we still roam and look, “aching for something mythical.”