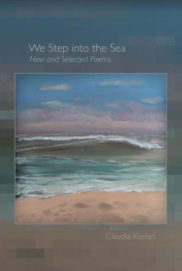 One of the strengths of Claudia Keelan as a poet—and a strength that is wonderfully showcased in her new and selected poems, We Step into the Sea—is that she remains restless and never predictable. Evincing a great curiosity, she engages in formal variation not to show off, but to see what tinkering with a form until it begins to buckle will reveal. This ends up being coupled, often surprisingly, with Keelan’s abiding interest in faith. But in this too she is hardly predictable, with a meditation on faith or existence opening up into shards of familial moments, the natural world, social justice, or collisions with the words of other writers. Keelan is not monkish in her approach to faith—or if she is, she’s more like a secular worker-priest, living among fellow workers and sharing their day-to-day concerns. Throughout, Keelan is committed to a carefully considered formal exploration which, as she suggests,

must not be experiments interested only in the ‘materiality’ of language but experiments dedicated to finding, at the level of the syllable, what life has been left out or erased in a dominant culture’s acceptance of conventional language modes. Such poetry is made of notes, without hierarchical but strictly relational value, a poetry whose ethos, like music’s, is indiscriminate in the best sense.

That is from “Debts: Before the Afterward,” originally in her book Utopic (Alice James Books, 2000) but relevant, I think, to the poems published both before and after. Often when I read a new and selected volume, I feel that it is something abbreviated, a kind of tasting menu meant to be a sales pitch for the earlier books. We Step into the Sea, however, feels like a carefully crafted volume, with its own considered shape and satisfactions. This is partly because of the way the poems talk to one another—the way a poem from 1994 can find echoes in one from 2009, for instance. Unexpected ligatures appear as Keelan’s concerns surface, submerge, and then reappear torqued in a different way, and this occurs both between sections and within them: Keelan’s assured language, verbal clarity, and her commitment to finding the life that has been left out make this a book more than a sampling.

That’s not to say there isn’t a variety of forms here. There’s a crown of poems, for instance, though the poems’ forms themselves shift even as they take their titles from the poems before. There are poems that begin to use the page as a field, poems that make the most of an irregular furrow running through them, poems that take on the form of plays or the shape of waves, lyrics of all sorts, poems that operate primarily through wordplay, ecstatic poems, poems whose lines stretch long enough to take on many of the strengths of prose, and so on.

The new poems take up almost the first third of the volume, and Keelan arranges them carefully, in four sections. The first section is a crown of linked poems, the second and third are more various formally but are still actively talking to one another. The fourth section consists of the long title poem, a haunting meditation on women known and unknown moving physically and metaphorically into the waves and through life, and this long poem is set against “Such Little Things,” a distilled five-line poem which insists that “I have swum      all my days      a little cold.”

Keelan’s new poems have the heft and the feel of a book in and of themselves, and when I first read them I found myself tempted to stop there, to absorb them as a unit. The poems that follow, taken from six earlier books in chronological order, initially seemed to fray the shape that the new poems create, but as I read more I began to understand it to be a partial rearranging of the initial pattern, an expansion of it, a progressive shifting of the book’s center in a way that shifted the light. That was most evident for me with “Bluff City,” a long poem written in Memphis in 1996 which moves from reflections on being to social issues and human (specifically female) suffering, and does so all in the careful consideration of a particular place and particular injury.

Indeed, by the time I finished the final section of the book, the poems from O, Heart (Barrow Street Press, 2014), which are thematically connected to one another and seem to assert their own sub-orbit, I found myself compelled to return to the beginning and reread the new poems. When I did, I found them even richer and more resonant than they had been on first read—with the “ventricles of a single sound” early in the book calling to the pumping of the heart late in the book and the “Swim swim” from later bringing me back to that moment of the I swimming all her days. It strikes me as a real achievement to choose poems that cover such a span of time in a way that allows them to talk to one another across decades and to still feel alive.

“I      miss the mark      draw bow & try again” says Keelan in “Such Little Things.” In We Step into the Sea, she almost never misses the mark, and she persists in striking the target in vivid and unexpected ways. This strong book distinguishes itself by feeling so much like a living, organic, unique thing rather than a baggy monster made of other beasts, and it is a wonderful introduction to Keelan’s unique voice.