THE LIGHTNING THAT STRIKES THE NEIGHBORS’ HOUSE
Nick Lantz
University of Wisconsin Press ($14.95)

I. THE THINGS THEMSELVES

Nick Lantz's We Don't Know We Don't Know and The Lightning That Strikes the Neighbors' House are both phenomenal books—the former is the 2009 Bakeless Prize-winner for poetry, the latter the 2010 Felix Pollack Prize-winner. Let's acknowledge that any writer who won just one of those contests would be worth attention; to win both prizes, and to have the books come out basically simultaneously, is the equivalent of a baseball player hitting a home run not just in his first at-bat, but off his first pitch.

Lantz's work could, like a good swath of American poetry presently published, be filed under the heading of Elliptical Poetry. In Stephen Burt's defining ur-text, a review of Susan Wheeler's Smokes in the Boston Review, he writes "Elliptical poets try to manifest a person—who speaks the poem and reflects the poet—while using all the verbal gizmos developed over the last few decades to undermine the coherence of speaking selves." It may be a testament to Burt's acuity that this exact tension is something of a default setting in contemporary American poetry.

How this tension plays out in Lantz's work is not necessarily as "verbal gizmos,” however, and certainly something's being undermined, but it's not necessarily “the coherence of speaking selves.” From "Vermeer's Woman Reading a Letter at an Open Window" in We Don't Know We Don't Know: "Vermeer's light fools you." From "The Marian Apparitions" in The Lightning That Strikes the Neighbors' House: "One Thing is not really / the other no matter how badly I wish / it were so." From "Either Or," in We Don't Know: "Naming / everything is a way / of naming nothing." What's being undermined is the stability of things—the suitability of the light in a Vermeer to truly illuminate; whether or not the name given to a man will be enough for the man to live within; how things, fundamentally, cannot be what we wish they were. 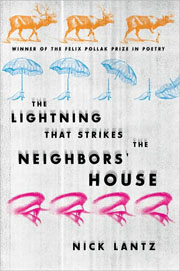 It's not for nothing that Lightning begins with a poem titled "The Ship of Theseus," (which your memory or a Google-search will let you know has to do with the paradox of an object's objectness if its constituent parts have been replaced); also not for nothing is the fact that We Don't Know We Don't Know takes its title from Donald Rumsfeld's famous speech delineating the four types of knowledge (known knowns, known unknowns, unknown unknowns, and unknown knowns). In both books, in their own ways (and in complementary ways when considered together), Lantz's poetry examines conceptions of knowing, with Lightning focused on the slipperiness of the objects trying to be understood and We Don't Know focused on the inconsistencies and difficulties inherent in the person trying to do the understanding.

II. AND WHO SPEAKS

That last bit, more than anything else, needs attention: the person trying to do the understanding. This is what makes putting Lantz's work among other Elliptical writers dicey, because Lantz's poetry is among the most self-less work in contemporary American poetry. To some degree, kudos is in order for that fact—it's far too common and simple for contemporary poetry to be built upon the shivery, unstable rock of the "I," and Lantz avoids that tricky trap. However, in its place is a startling lack of narrator, of poetic self. This lack wouldn't be a problem were it not for the fact that Lantz's poetry seems, at times, to be trying to make aspects of narrative cohere; for instance, a dead brother haunts both collections; a single father plays a large role; whatever consistent speaker is present is married (a wife is mentioned in both books); and religion, specifically Christianity, plays heavily throughout all of this, as do paintings and myth. 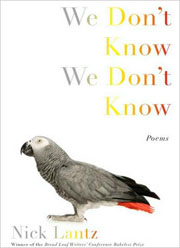 Read just about any contemporary poet working the seam between lyric, narrative, and surrealism —C.D. Wright, Bob Hicok, or Tony Hoagland, for example—and you can't help but have an understanding of that writer's writerly self after a handful of poems (or, if the narrator is someone other than the writer, that's made clear). Lantz, however, seems to be trying to work the magic of the lyric/narrative hybrid from an absence of self. This particular trick is made manifest through Lantz's use of "you" in his poems, which somehow ends up being massively troubling. For instance, "Thinking Makes it So," fromWe Don't Know We Don't Know:

Less matter with more art, I say. Don't
retell the story of your brother and his
seven dogs minus one. How did it go?

The reader's thrust weirdly into this poem, having to somehow tell a story s/he likely doesn't know. Stranger still, halfway through the poem come the lines

You first told me this story while we were looking down
into a volcanic crater
filled with a lake so blue the sky was ashamed of itself.

The construction here—the fact that Lantz would make the poem contingent on a “you” to tell/complete the story instead of a “you” who is the listener, the spoken-to—is both a cool shift and a difficult one.

Lantz offers, despite this unstable and destabilizing “you,” startling imagery and fantastic conjunctions in both books. Seemingly unafraid of any subject, Lantz dances fast from Aristotle to astronauts in We Don't Know We Don't Know's very first poem, “Ancient Theories”:

Why not believe that the eye throws its own light,
that seeing illuminates
the world?
On the moon,
astronaut David Scott drops a hammer and a falcon feather,
and we learn nothing
we didn't already know.

Beyond the wordplay and strange conjunctions, however, Lantz is working magic in terms of structure and form. In both books he utilizes an intriguing form, as in Lightning’s “Judith & Holoferenes”:

The brain goes on living, or so they say, for a few
seconds after the head is
severed. The tent stays
shut. The sword rusts down to a feather of iron.

I don't know if there's a name for this: the lines essentially form triplets, starting at the left margin, tabbing in one, and then tabbing in severely (the third tabbed-in line varies). The form—malleable, shifting, recognizable—is welcome and interesting, and allows Lantz both the flexibility to whirl through his poetry and dramatize breaks while simultaneously offering the reader the comforts of classicism and formality.

We Don't Know We Don't Know is sectioned according to the Rumsfeldian quartet (though the second section, Known Unknowns, is made entirely of the long poem "Will There Be More Than One 'Questioner'?"), and a good chunk of the poems feature either a Rumsfeld quotation at their start or, more startling, a passage from Pliny the Elder. Side-by-side, Pliny's observations about the natural world and how it's apprehended form a pleasing dialogue with Rumsfeld's lines about the tricky linguistic horrors of the war in Iraq (though Lantz's politics don't color the poetry; dogma is, in fact, absent, and, regardless of how one feels about the war, it's impossible not to be a little mesmerized by Rumsfeld's linguistics). Against these two questioning guides, eons apart, the poems probe at ideas of memory and knowledge, returning always to the slipperiness inherent in ever truly knowing anything. The opening lines of "List of Things We Know" acknowledge just how slippery is the slope:

40% of all
births are
accidental.
10% of all
accidents
are births.

The Lightning That Strikes the Neighbors' House is divided into three parts, structured almost as a trip—it starts with the Joyce Carol Oats-ian "Where You Are, Where You've Been, Where You're Going," heads through "What Land of Milk and Honey," and ends with "Back to Earth Unharmed." Rumsfeld and Pliny are gone; in their place are Bible stories, myths, paintings, national parks, newspaper headlines, films of Bigfoot, and Jimi Hendrix. In place of We Don't Know’s long "Questioner," there's "The History of Fire," a seven-page whopper that establishes that the reader and the world of the poems are within history (and, therefore, inherently obscured):

for hours, the train

glides through the smoke, and this
makes it easy to forget where you are,

where you've been, and where you're going.

Nick Lantz's two debut books establish him as a major new poet, and his willingness to challenge form and narrative identity is laudable. Regardless of the occasional haunted feel of certain of his poems, both books are testament to someone deeply engaged with trying to come to some meaningful and stable system through which to understand, apprehend, and appreciate the world.