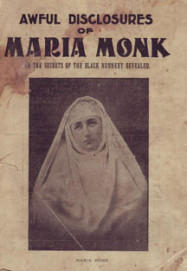 When eighteen-year-old Maria Monk arrived in New York pregnant, it was seeming proof of her sensational claims, recounted in public appearances and in this book, that she’d escaped from a nunnery in Canada complete with lascivious priests, blood-thirsty nuns, secret subterranean passageways, dungeons, and a lye pit into which were flung the babies born of the forced nocturnal encounters between priests and nuns. Like many of today’s memoir writers, Monk felt she must tell all, “even if delicacy must be in some degree wounded by revealing fact.”

Awful Disclosures of the Hotel Dieu Nunnery, first published in 1836, became an immediate bestseller, the most purchased American book until Uncle Tom’s Cabin came around in 1852. Like the later book, Monk’s fake memoir was both an entertainment and a call to action. The 300,000 people who bought it surely took some titillation from the references to sex and the explicit scenes wherein, for instance, a gang of women hold a girl down, bind her spread-eagle to a mattress, and trample her to death. Yet these scenes also played to a rising ideology. As Stowe’s novel stoked the abolitionist movement, Monk’s book encapsulated the anti-Catholic fervor that swept the nation between the 1830s and the Civil War.

The United States had been the most Protestant nation in the world, but a massive influx of immigrants radically reshaped the demographics of urban centers in the decades between 1830 and 1860. The rise of Native American ideology and the infamous Know-Nothing political party was one manifestation of reactionary Protestant fears. Riots, the torchings of convents and churches, and massacres in Saint Louis and Louisville were also part of the backlash against this population shift. And influencing all of these responses was a wealth of anti-Catholic literature, books presented as written by those who had suffered unspeakable abuses. These books were both potboilers and propaganda, pornography making a plea for policy changes, all the while masked as a cautionary tale, an urgent public service message: “Many an innocent girl may this year be exposed to the dangers of which I was ignorant. I am resolved, that so far as depends on me, not one more victim shall fall into the hands of those enemies in whose power I so lately have been.”

Awful Disclosures, set in Canada among French Catholics, panders to a sense of being under siege by the foreign and ethnic other, but it also offers a multi-faceted attack on Catholic practice and belief, reflecting both widespread fears and misconceptions as well as social tensions around a changing American society. Concerns about sex, education, the role of women, and the constitution of community thus find expression in its gory torture-chamber scenes.

Protestant unease about sex found two aspects of Catholicism disturbing. Celibacy, viewed by many as a perversion, is presented by Monk as a pure hypocrisy; under the guise of the priesthood, the men who visit the nunnery are constantly having sex. On the other hand, the role of men as confessors, engaging in intimate conversations with women about sexual matters—conversations of a sort not permissible in any other social forum—was also disturbing to many non-Catholics. Monk presents confession as the keystone of the Catholic conspiracy, a network ruled by fear and blackmail where every believer informs to his or her priest and where the community, in turn, can rise as one to smash all their enemies. Protestant worry about the hierarchical nature of the Roman Catholic Church is here given terrifying form. Monk claims that priests routinely deflower brides and inform husbands of to remind them of the controlling power of the Church. She also claims to have been repeatedly told that priests “acted under the direct sanction of God, and could not sin,” and that the faithful even believed they had supernatural powers, including those of controlling natural forces and causing instant death.

As the Protestant movement was defined by personal relation to scripture and a move away from ritualism, Monk’s account rehashes very old slanders. But at a time in America when Catholics were educating Protestant children and establishing schools, her attack has relevance. Not only, she claims, is Catholic ritualism hypocritical (as, for instance, when babies born by raped nuns are baptized before being murdered), but Catholic education is mere indoctrination. Her perversion of the catechism satirized both rote learning and Catholic law: “Why did not God make all the commandments?” “Because man is not strong enough to keep them”; “Why are men not to read the New Testament?” “Because the mind of man is too limited and weak to understand what God was written.”

Books and private reading are taboo in the nunnery, with vernacular copies of the Bible absolutely absent. “Great dislike to the Bible was shown by those who conversed with me about it,” she writes at one point, and then she returns again and again to the idea “that the Scriptures render the people of the United States so strongly opposed to such doctrines as are taught in the Black and the Congregational Nunneries of Montreal.” In her virulent anti-Catholicism, Monk crafts a patriotic myth of America as a nation of strong-minded, independent Protestants who engage in direct study of scriptures. The Catholics have their clannishness, occult rites, and group-think, she argues, but they long, more than anything, for the conversion of Americans. “The priests and nuns often used to declare, that of all heretics, the children from the United States were the most difficult to be converted; and it was thought a great triumph when one of them was brought over to ‘the true faith.’”

If Monk’s book defines Americans as Protestants whose behaviors and characteristics are in contrast with those of the outlandish villains she describes, she also subtly articulates an area of great risk for American women. If you don’t want to end up eating eels that have been fed on corpses or being gagged so hard your lips bleed, know your proper role and place, Monk’s book says. The anti-conventual literature of this period, for all its arousing scenes, also stressed the safety and social importance of women remaining settled in marriage and family life—keeping to the trinity Luther described as “Kinder, Kirche, and Küche” (children, church, and kitchen), rather than seeking education and independence from such traditional structures, which is precisely what Catholicism offered. Nunneries, a radical avenue toward education and freedom that simply didn’t exist in Protestant culture, represented a major threat to the status quo, and thus became a source of fear and fascination. Even Nathaniel Hawthorne plays to the trope in his 1860 novel The Marble Fawn, wherein the heroine is kidnapped and held in an Italian convent. While she doesn’t suffer the elaborate humiliations Maria Monk described, both books tap a similar nerve, feeding the need of American society to construct an idealized and exclusionary image of itself while simultaneously expressing fears of the other by creating absurd villains.