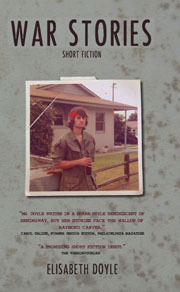 We all possess a war story or two, narratives hoisted and lugged around long after they convert to memory, remembered because they helped define our character and shaped our being. For some, these tales concern actual military combat, but to most, the idea has adopted a more casual definition: a very rough patch, a difficult episode, a particularly wild adventure. Elisabeth Doyle, in her debut collection, War Stories, parses through both versions of this term with a deft hand, offering stories of shock, realization, sorrow, and peace. And while the slim volume doesn’t always fully succeed in its ambitions, there is plenty here to admire.

Doyle’s stories do not subscribe to a traditional story structure—intro, conflict, resolution— instead remaining rather loose throughout. Teenagers meander around town, driving and talking. A veteran happens upon a chance at heroics while bringing his children to school. Remembrances of a jumbled past break through as a man recounts the story of visiting an old roommate. And yet, while each of these stories lack rigidness, very rarely, if ever, do any of their scenes feel extraneous, and they certainly never ring hollow. Part of this is due to the conciseness of each piece—the stories range in length from five to fifteen pages, preventing any asides from going on for very long—but what truly generates impact are the small moments of growth that occur on nearly every page.

Take Eveline, the wife of an injured veteran and the protagonist of “Pistolesi,” who takes a job as a traveling children’s photographer. Shuttled through a shifting environment of homes, interactions, and observations, her perceptions and curiosity blossom, creating significant reader engagement. So much so that when she eventually drifts off near the story’s conclusion, dreaming of “two rocks separating, disclosing a small tree”—an image that, incidentally, reoccurs later in the story collection—the seemingly random occurrence holds far more weight than if these minor moments did not pass the reader’s eye. Likewise, in “The Deepest, Darkest Part of the Woods,” Doyle manufactures a sequence of events for Bobby Campo, her lead handicapped soldier, to navigate. When the narrative thread that ties these scenes together finally pulls through, the reader finds emotional resonance with the troubled character. As Bobby takes solace in an imagined friendship with a much younger neighborhood girl, his motivation, enhanced by the auxiliary moments of the narrative—his brief interactions with his brother and family, his games of pool, the death of his pal, Tony—make him a rounded entity.

Still, not every story in the collection works. Here and there, Doyle’s brevity leads to unsatisfying conclusions and unneeded ambiguity. And the final story, “Passengers,” simply feels uncomfortably forced. A nod to the airline hijackings of 9/11, the story lacks the subtlety of the eight tales that precede it, instead placing predictable characters in a predictable situation.