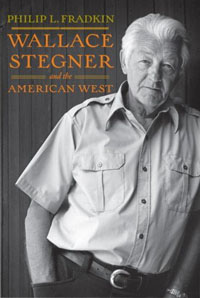 Philip L. Fradkin, an award winning California journalist, here takes on the large subject of the iconic West Coast writer, writing teacher, and conservationist Wallace Stegner. Stegner (1909-1993), who grew up on the frontier in the early parts of the century, became one of the first teachers of creative writing in America; numerous students of his went on to become household names. Fradkin, in this biography, explores the powerful impact that Stegner had on American literature and especially the American West.

Stegner’s childhood was spent in many Western locations including Seattle, Great Falls, Salt Lake City, and Saskatchewan. Describing his time in Canada, Stegner wrote to a literary agent in later years: “This was, in other words, practically the last real frontier; the town started from scratch, as a thousand American and Canadian towns have started, and developed its institutions and its local history, personalities, lore, from nothing.”

But Stegner could not get the frontier experience out of his system, going on to write many stories about his childhood. In the introduction to the autobiographical collection Willow Wolf, his son Page—also a literary man and scholar—wrote of the time his father spent on the Saskatchewan and Montana border: “It is, in short, a paradigm of the book’s central motif—Wallace Stegner searching the Cypress Hills country to reestablish the circumstances of his childhood environment, and in so doing to define himself as a human being.”

Fradkin writes that it was a “miracle” that Stegner, whose childhood experiences were character forming, did not become a pulp Western writer. His take on the West was realism, and he wrote about the success of cooperation rather than “rugged individualism.” He went on to study at the University of Utah, at the University of Iowa, and at Harvard, getting “in on the ground floor of the most prominent efforts to teach writing” in America. He went on to help establish the Creative Writing Program at Stanford University, and a writing fellowship there is still named after him.

Stegner also became a player in the environmental movement. His biography of the pioneering conservationist John Wesley Power, Beyond the Hundredth Meridian, was a nonfiction masterpiece. Although “old school” in his thinking, Stegner adapted to the newer green movement of the 1960s and ’70s, getting involved in open space battles as he watched the growth of Silicon Valley. He was also a board member of the Sierra Club and worked for the Department of the Interior. Most notably, he helped convince the nation of the importance of wilderness in his famous, widely read, and very quotable “Wilderness Letter,” where he wrote: “I want to speak for the wilderness idea as something that has helped form our character and that has certainly shaped our history as a people. . . . Something will have gone out of us as a people if we ever let the remaining wilderness be destroyed.”

After more than forty years, Stegner decided to resign from Stanford to pursue his writing; indeed, it was not until late in his career that he was widely recognized for his creative output. Over the years he won a few awards and prizes: one for the early novella that launched his literary career, Remembering Laughter(1937), three O. Henry awards for short stories (1942, 1948, 1950), a Commonwealth Cub Gold Medal for All the Live Little Things (1967), the Pulitzer Prize for Angle of Repose (1971), and the National Book Award for Spectator Bird (1977). Stegner’s writing was cerebral, dwelling on the lives and history he tried to share. In all his work he sought to debunk the Western myth, having lived through the urbanization of the frontier.

Fradkin clearly admires Stegner, but he does not always depict the writer in a good light. He points out that Stegner was elitist, criticized the counter culture, and was involved in a plagiarism controversy overAngle of Repose, in which he used the life and letters of Arthur and Mary Hallock Foote to help tell the story of the main character’s ancestors. Some felt that rather than portraying a fictional character based on Mrs. Foote in the novel, she was important enough in her own right to have had a biography written about her (Foote, who was already deceased, was a Western writer and illustrator of distinction). Fradkin states that Stegner “found his material in life, and then used his imaginative powers to shape the accounts into the fictions that fit his needs.”

The whole matter was treated as a learning experience, but it brought up an important issue that still plagues writers who write about the same material as others. Is the telling of history owned? Can we not say the sky is blue because someone has said it before us? Fradkin explains,

The Foote matter was a tangled mess—apparently Stegner did not ask enough family members for permission to use the letters—but Angle of Repose is not remembered because of the controversy, it is remembered, and still read, because it is a first-rate novel. If its author was never as famous as some, he is still an important Western writer who had a profound influence on the American imagination. Though there is gloss in Fradkin’s account of his life, it is also at times gritty; it does not leave the reader with a clear sense of Stegner, but rather with a multi-faceted portrait. Perhaps in that sense the writer most resembles the American West he loved.