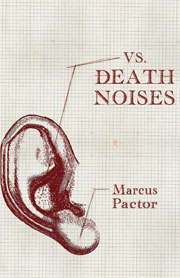 John Gardner’s venerable The Art of Fiction ends with a set of pedagogical prompts, many of which are designed to teach that aesthetic tact whereby the young writer will learn to evoke great emotion without wallowing in sentimentality: “Describe a building as seen by a man whose son has just been killed in a war. Do not mention the son, war, death, or the old man doing the seeing . . .” The most successful and moving stories in Marcus Pactor’s debut collection, Vs. Death Noises, read like responses to Gardner’s exercises. Pactor at his best is an inventor: he builds ingenious narrative devices that tell stories of loss and grief while describing something else entirely.

The narrator of “Robot Voice Babble,” for instance, recounts a day spent online and on the phone, checking social networks, reading the news, writing his congressman, and fighting with the eponymous robot voice about his credit card bill. Pactor concisely suggests the sheer mindless chatter of the Internet as his narrator trawls the message boards:

But we gradually realize that the narrator has turned to all this semiotic detritus after his mother’s death, perhaps by suicide. When he wishes at the story’s end to hear a command from God that will stop the noise, we understand that the story confronts the lethal noises of our culture’s abundant prattle with those authentic death noises that portend an encounter with the ultimate.

This existential confrontation, along with our many ways of evading it, is the central theme of the collection. As Gardner’s exercises suggest, however, evasion can also be a way of registering damage indirectly, so that we’ve already learned a harsh truth before we’ve had time to flinch. The least compelling stories in Vs. Death Noises are conversely too literal, directly treating death and grief in a way that recalls Gardner’s notorious advocacy of earnestly Tolstoyan “moral fiction.”

Vs. Death Noises is bookended by a pair of stories about a young man named Steve. The first story’s narrator combs through Steve’s apartment after his death and finds a note about how we distract ourselves with trivia from the real texture and feel of the world. Steve concludes that, in contrast to these strategies of avoidance, “The development of true sensitivity is essential.” In the final story, which takes place before Steve’s death, he and his roommate—implicitly the narrator of the first story—discuss at length the meaning of a single hair’s shape. This conversation seems to have no bearing on the grand issues of life and death, but it models that “true sensitivity” with which Pactor encourages us to face reality.

Eschewing mere realism, Pactor’s experimental narratives sharpen our sensibilities so that we can hear the faint life behind the louder noises of death that surround us. In this inventive and anti-complacent way, they are moral fictions after all.