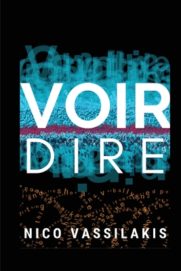 The French legal phrase that titles this book, literally “see say,” roughly means to say what one has seen, to swear to tell the truth. Given the playful tone of some of the prose and poetry contained herein, it would be easy to read Voir Dire as a tongue-in-cheek defense of vispo (shorthand for “visual poetry”), a movement of which Vassilakis has been at the forefront. This contrast between the title of the book and the tone of the writing raises several questions: to whom or what is this defense offered? What are the charges against the “defendant”? On whose behalf does Vassilakis speak? Who are the plaintiffs?

Before getting into some of these issues, it must be said that Voir Dire is a pleasure to read. One can, if one wishes, pass over the “arguments” of some of this writing in order to delight in a loopy, surrealist practice, especially in the first section, “Then There Was You.” As in his other books, Vassilakis is unpretentious, humorous, witty, and completely self-effacing. In that, he is child-like (not childish) and absolutely serious, and so it is not surprising that toward the end of the book, he couples a straightforward description of vispo as a practice (“A visual poem is successful when it makes alternative use of writing and devalues the sequence of alphabet typically reserved for word communication”) with a critique of the formal (read: educational) development of children’s writing practices, which narrow from “free expression in drawing to rigid grid-like writing that makes everything the same.” However, as the poem “Retinal Boss” makes clear, and the surrealist reference above suggests, Vassilakis is not interested in merely reversing the word/letter hierarchy. Rather, he wants to “Wring out the smallest elements / Wring out the letters and see what’s left//Now go past that.”

We have seen this before, of course. From Freud’s and Jung’s valorization of the unconscious to Deleuze’s and Guattari’s anti-oedipal schizophrenia, the belief in a more real Real (just to bring Lacan into the assembly) has dominated thought in a number of the humanities, including poetry.

Somewhere between vispo and pure thought there is asemic art, and certainly Vassilakis’ reference to the pre-letter drawings of children verge on this recent, and increasingly popular, practice which blurs the difference between writing and drawing. It is thus surprising that Vassilakis makes no reference to asemic art, at least not by name. Nonetheless, the two sections of this book (“Then There Was You” and “Voir Dire”) may be understood as constituting two answers to those questions I posed above. Read in the plural, the “You” of the first section may refer to the reader who, by virtue of having acquired fluency in English, demands what Barthes called a readerly text, writing that checks all the boxes and is thus easily digestible. At the same time, this “you” could also refer to the skirmishes over national languages in Canada. In that sense, the book’s title might well be asserting a kind of Francophone “origin” story (Voir Dire) vis-à-vis Anglophone usurpation (“Then There Was You”). Indeed, Vassilakis may here be alluding to the Quebecois wars): J’Accuse Anglais. However, the first section’s adverb adverb verb pronoun title, “Then There Was . . .,” acknowledges the reader while refusing to give in entirely to the readerly; writerly interjections—“We’re like that—a family made from sky,” “Hey writing, I don’t know you anymore”—wrest control from the readerly.

If we, the readers, are tempted to judge this book, we, as jurors, are forced to consider that the author may be a kind of madman, a person with (at least) two personalities (Dr. Readerly, Mr. Writerly) whose testimonies neutralize one another. Rather than risk being hung, we can, as I noted above, simply go along for the ride on Vassilakis’ plainspoken flights of fancy and imagination. Even when he is mocking hierarchy per se (“He was a Disciple, a brick out of the pyramid”) or recalling the necessity of/desire for handwriting (“I was too busy looking for a pen”), Vassilakis never takes himself too seriously. And these days, that’s an all-too-rare quality.