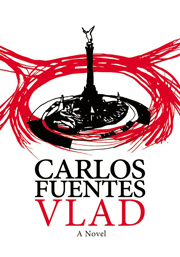 It’s not easy being a Vlad in the West. Trust me, I know. Eastern Europe remains trapped in age-old feuds, economic dysfunction, and social morass. Occasionally one is forced to flee depreciating currencies, pitchfork wielding mobs, or communists. In Carlos Fuentes’s delectably blood curdling and final fiction, a retelling if not a sequel to Dracula, the ageless wanderer is transported to modern-day Mexico City, a town whose endemic lawlessness, moral dissipation, and shoulder shrugging indifference to the specific whereabouts of this or that citizen make it the perfect roost for the dispossessed revenant.

This obliquely modernized but not modernist reimagining of Bram Stoker’s gothic classic is told from the perspective of a pedigreed and ambitious young lawyer, Yves Navarro, partner in a Mexico City law firm. Navarro is tasked by his boss, the enigmatic Don Eloy Zurinaga, to assist an old Sorbonne Law School friend with very particular tastes in procuring a house—one that is “easy to defend against intruders” with a ravine in the backyard connected to a dungeon by secret tunnels. Helpfully and not uncoincidentally, Navarro’s doting young wife Asuncion is a real estate lawyer. The self-conceited young Bobo couple’s nights are consumed by bouts of steamy sex, and their mornings by equally languid breakfasts. They have a lovely daughter and are a model family but for the tragic drowning death of their son, a lingering trauma that poisons the family idyll. When the hapless young lawyer is asked to drop by the haunted house, a hunchbacked butler named Borgo is of course not far behind (recall Jorges, the villainous librarian in Eco’s The Name of the Rose, also named after the master).

As Dracula, that strigoli of semiotics, sinks his fangs into sex and class relations as often as he does the carotid artery, Fuentes’s novella is an allegory for the strange suffocations of bourgeois family life. Bored Asuncion lusts after the prince of darkness in pleasingly frothy manner (“I enjoy being with Vlad. He’s a man who instantly knows all a woman’s weaknesses . . .”) and sly references to the Dracula canon abound. The book offers some rather alluring instances of intertextuality to keep cadres of comparative literature scholars working, as well as setting out a mock fantasy lineage and believable East European alternate history.

The novella is morbidly funny and exquisitely readable. Fuentes takes an unmistakable pleasure in serving up disappearing castles and blood sausages (no garlic in the recipe—“We use pork dust, Maitre Navarro. From an old recipe that Saint Eutychius prescribed to expel a demon that a nun had swallowed up without noticing,” the count tells us before reciting a bawdy tale to the horrified young lawyer). His death this past spring has left a gaping hole in the firmament of world literature. Having lost a friend, we must mourn and reread his books—and hope also that he does not return to us as a member of the Nosferatu.