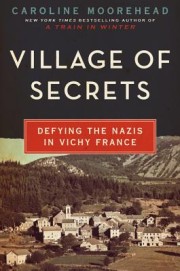 Although the short foreword to Caroline Moorehead’s Village of Secrets: Defying the Nazis in Vichy France makes it apparent that this work will be covering new material, the narrative itself begins rather slowly. Its first chapter, “Mea culpa,” centers on a few specific French-Jewish families, most of whom simply could not imagine that the pre-war anti-Semitism stoked by the likes of Charles Maurras, Xavier Vallat, Louis-Ferdinand Céline, and others would have a significant effect. They felt safe in their homeland. As the elderly Prime Minister Raymond Poincaré had declared: “After the Dreyfus affair, anti-Semitism will no longer ever be possible again in France.”

But with the defeat of the French by the Nazis, and the sudden split of the country into Nazi-controlled and Vichy-ruled territories, everything was turned on end: new edicts against the Jews were almost weekly posted. What once seemed impossible became a shocking reality these families suddenly had to face, some of them breaking up, sending the children and one parent into relative safety while the other remained behind to close up affairs or to follow when a safe haven had been reached.

If Moorehead’s work begins as a slow-rolling narrative of some individuals directly affected by these radical changes, it quickly moves, with ever-greater urgency, into an almost breathtaking adventure tale. As we learned after the war, Jews were hidden in various places throughout France, and others were helped to escape through Switzerland and Spain. Yet large numbers of French Jews, particularly as Eichmann and others in Germany demanded more and more roundups, were sent to their deaths in Auschwitz, Belsen, and other camps; at first these included primarily “outside” European Jews who had escaped to France from various countries, but by the end of the war the steady trainloads of children, middle-aged, and older Jews included nearly anyone the Gestapo and the Vichy government could ferret out. And the people who hid them were also arrested and sent off to prisons with few proper accommodations (no plumbing, little food, in many cases not even beds) and with high death rates. Particularly after the Allied attacks in November 1942 on northern Africa, which led the Germans to retaliate by marching into Vichy territory, the attacks on Jews, immigrants, and French citizens increased.

Most of this has been well documented in the hundreds of books about World War II and Vichy France. But what Village of Secrets reveals is startlingly different from the history of the country in general: it represents such astounding exceptions that, after reading this book, one feels a bit as if he or she has actually participated in history itself.

In one small region of Vichy France, something remarkable happened. There a protestant pastor, André Trocmé, with his wife Magda and their three young children, began a revolution that was to change everything we know about French history. A strong supporter of non-violence, Trocmé preached to his worshipers the idea not only of pacifism, but of what came to be described as a “conspiracy of good.” These quiet, almost silent families, who themselves had through the centuries suffered their own forms of persecution, determined to take in Jewish, Spanish-Republican, and other endangered children and adults.

Trocmé’s small hometown of Chambon-sur-Lignon had already become known for its healthy summer air, and had built large hotels to cater to children and their parents who suffered from chronic asthma and lung diseases. In winter the snow cover made the community, approachable primarily through a single rail line, almost impassable. For all these reasons the location was quickly perceived by the numerous brave individuals and organizations that had already banded together to help save children and adults from Vichy prisons as a possible destination. But even they might not have imagined what soon would transpire.

Not only were Trocmé, local innkeepers, teachers, and authorities willing to help, but numerous local farmers, shop-keepers, and clergymen in small surrounding towns joined in. Farmers, both Protestant and Catholic, willingly housed numerous children, mingling them, in some cases, with their own families. Priests, along with a few Catholic leaders, actively supported—in some cases even more radically than Trocmé—the underground activities. Rescuers within this region and from elsewhere set up connections, links, and codes to bring children to the region and, when fear grew near the end of the war that the Gestapo was moving in on the Plateau operations, created methods of escape and plans to sneak the children over the Swiss border. Forgers created new passports and other papers; doctors offered medical services; boy scout leaders led the children on hiking and camping trips to keep them fit; and the mayors of the small towns not only “looked the other way,” but actively participated in the cover-ups. In some cases, it appears, even Vichy and German authorities collaborated with the underground figures by warning them and failing to carry out Nazi demands.

Trocmé’s bravery and sometimes fool-hardy outspokenness, as well as his village’s exceptional activities, have been well known for several years; what Moorehead reveals are the intricacies, for better and worse, of that commitment and, more importantly, the fact that the entire region was filled with equally brave and sometimes even more daring individuals—all of whom together saved thousands from capture and possible extermination.

Detailing the vast network of these underground activities, Village of Secrets valiantly succeeds in separating myth from fact. Although at one time it was estimated that 5,000 people may have been saved in the Haute Loire, Moorehead suggests it was more likely from 800 to 1,000, with perhaps 3,000 more passing through and taken away to safety. The truth is just as astounding—that these small, isolated communities should have contained a population so like-minded in their humanistic values and equally tight-lipped about their activities in a time of so little food and so many personal threats to their lives is almost beyond imagination. Yet few of the natives, at War’s end, felt like they had done anything out of the ordinary.

Everyone who went through the experience was changed, some finding it difficult after the war to reintegrate into the Jewish community, others becoming notable figures in Israel, the United States, and other nations to which they scattered after the Holocaust. But all felt blessed just to be among the saved few who survived the German occupation of France. Pierre Bloch—one of the children central to the book’s narrative, now living in a kibbutz in Lebanon—expresses his wonderment of this experience: “We lived a very big adventure, an exceptional moment of time and place. It was something extraordinary to be young, engaged at a moment when France was so dark. There was something in the air, in the spirit of the people, that none of us ever forgot. All my life I have tried to live up to that moment.”