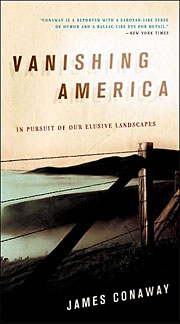 A collection of vignettes about “exceptional American places” that “serve as physical and spiritual barometers” to the declining state of the country, Vanishing America laments the cancerous spread of development, of “nihilistic, temporarily enriching transformations” that destroy public land and wreck the cultural heritage of unique places. James Conaway’s America is defined by “a deep sense of loss,” and, indeed, the book is motivated by nostalgia for an imagined time before values were so quickly swept aside in favor of malignant “market forces.” The National Park Service, for instance, once “stood not just for the preservation of parks and historic structures but also for a certain old-fashioned ethic,” writes Conaway, who sits in with horror on a board meeting where administrators debate corporate sponsorship and whether a license should be granted for Park Service Barbie dolls. In Conaway’s ideal vision of “time past” there were “no isolated strip malls in the countryside or dinky housing developments beyond community limits.” The “more or less neat divide between urban and rural” that once existed is “at odds with America’s sprawling development ethic,” an ethic conceivably as monolithic as those old-time values that the Park Service once represented.

Conaway has previously expressed his dismay about development in two books on the Napa Valley. Napa: The Story of an American Eden, which appeared at the end of the ’80s, pleads with those in power to preserve the unique interrelatedness of winemaking and community that made Napa something of a land-use utopia. The follow-up, The Far Side of Eden, focuses on the change: “The pioneering spirit of the 1960s has been replaced by a desire for notoriety and a style of life unrelated to the land as anything more than a backdrop, and in many cases, the architecture is clearly more important than the wine.” He cites a Frank Gehry building that dwarfs an “historic stone winery built in 1885 by a New England sea captain,” saying this “highly visible, contemporary structure reflective of fashion, not function, reduces the authentic and historically resonant to an ornament.”

Such nostalgia makes odd bedfellows. Following the money behind successful preservation attempts, Conaway ends up rubbing shoulders with wealthy fox hunters in Virginia, itemizing their elaborate codes of dress and behavior. Yet these aristocratic relics, like the insular owners of mansions on Nantucket, can’t really offer a model for a solution. The book desperately needs clear, critical, and forward-thinking engagement with the causes of urban expansion and wilderness destruction, with consideration of policy and planning factors and the needs of populations—including the poor—to counterbalance Conaway’s reiteration of the need for vast tracts of wilderness and his appreciation for the aesthetics of earlier times.

Instead, Conaway offers a collection of obituaries. New Orleans, we learn, will never be the same post-Katrina (though the essay, which details the author’s first morning in that city just after Betsy blew through, is nicely written), nor will the Maine woods ever be as Thoreau saw them (though, again, recounting the calls of loons and mergansers, Conaway gives us a vivid taste of the last drinkable river along the eastern seaboard). These examples illustrate the scope of Conaway’s project: the problems of the Crescent City are tied to institutionalized racism and governmental incompetence, while in Maine, poorly regulated, short-sighted greed for timber is to blame. Conaway could be clearer on the categories here, rather than subsuming them together in a nostalgic narrative of lapsed principles and lost particularity.

Conaway’s zeal is also blunted by flailing indignation. When he fantasizes, paranoid, that the old man admiring his 1954 Ford is secretly nursing a sense of affront over desegregation, Betty Friedan, “and, of course, Bill Clinton,” readers will surely be put at a suspicious distance. Yet Conaway himself speaks lovingly of the truck, admiring that “oblations performed upon it were simple and satisfying,” like adding polenta meal to the transmission oil to help plug a leak. “No megabytes hidden in this beast,” he writes, “no binary math or electronic fluting in microscopic silicon bowels, just explosion and venting.” All of which is very much Conaway’s ideal, regardless of what he might think of busing or Betty Friedan.

Vanishing America is not a visionary work, but its value is much like that of a naturalist’s notebook, offering sketches of scenes that, in today’s world, are increasingly rare. Conaway savoring cabernet and borscht with a hermit in Big Sur or watching a heron drop “like a collapsing card table” down to prey are refreshing reminders of the ecstasy of being truly present in, and aware of, a place. The storm-lashed beach fortifications on Dry Tortugas, no matter that tourists’ lack of appreciation and public lack of funds will lead to their eventual demise, remain here, on the page, as an emblem of those elusive landscapes worth experiencing and fighting to save.