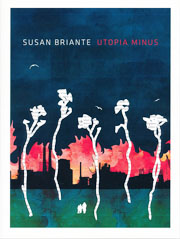 Utopia Minus is built on a subtle but pervasive distinction. Susan Briante takes her title from Robert Smithson’s A Guide to the Monuments of Passaic New Jersey, in which Smithson discusses a “ruins in reverse,” where “the buildings don’t fall into ruin after they are built but rather rise into ruin before they are built. . . . the suburbs exist without a rational past without the ‘big events’ of history. . . . A Utopia minus a bottom.” This gives a haunting sense of inevitability to the future of the suburbs: because they lack a foundation, they also lack intent and direction.

Briante’s poems articulate the stagnancy of a population born and raised in the suburban sprawl—not just that of her own New Jersey and Texas, but everywhere in America—with ease and even a playfulness with the language. While the poems of this collection are often in verse, many break out into sentences and whole paragraphs of prose. And the author is direct and deliberate in image and word choice, which makes her lines resonate all the more. Here is the center of “Nail Guns in the Morning,” in which external tensions build upon one another:

this weather, this fiscal year, this end of empire during which I am reading
the circulars stuck in my screen door, ice waiting
in the highest breath of atmosphere.
It will get to us.

These poems push against their margins, just as Briante pushes against the margins of her world and of herself. “How does a tree move when it is angry?” she asks. “I want to be angry like that.” Sometimes, yes, she is angry, but she is never moralizing. Hers is a cultivated anger, informed by sorrow and longing, by personal and cultural memory. In “Isabella,” much of this collides:

Last night’s sleep was shallow, and I dreamt
I flung myself over a group of children
with arms spread until my winter jacket
opened to wings. Men torched
parked cars. Police hurled grenades
across a street. And while we huddled
behind a Gap advertisement near a subway
entrance, my father ran towards
the barricades calling
another woman’s name.

The structure of Utopia Minus adds to these themes. Of the three sections, the first two conclude in three memoranda each, with poems addressed to particular officials: “Dear Madam Secretary of Homeland Security,” “Dear Mr. Secretary of Housing and Urban Development,” “Dear Mr. Chairman of Ethics, Leadership and Personnel Policy in the U.S. Army’s Office of the Deputy Chief of Staff for Personnel,” and so on. Despite the imperative that falls into some of these poems (“Pull over. Price what you see. Privatize this rush-hour traffic. Look disappointed”), the first sections build, in lyric images, the tone of expertly handled moral outrage: of urban sprawl and abandoned buildings, of storms building up, all in “the year of the Dixie cup, in the year of the orange construction cone.”

Tellingly, however, the final section turns inward, realizing that memory—despite what it reminds us of—is perhaps what can save a place that has, inevitably, been built into ruin. Take “Up the Road”:

In this final section, the once fluid prose that conveyed stagnation through imagery now fractures and proceeds haltingly, and a storm finally begins to bloom, though still in the distance: