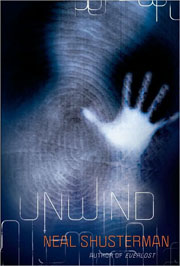 Disaffected youth everywhere will relate to this dark tale by master story-spinner Neal Shusterman. In his young-adult thriller Unwind, Shusterman imagines a near-future America after a second Civil War, dubbed “The Heartland War,” which pits Pro-life and Pro-choice forces against each other. A strange compromise of sorts is reached. “The Bill of Life” states that “human life may not be touched from the moment of conception until a child reaches the age of thirteen,” after which the parents may “choose to retroactively ‘abort’ a child.” The child designated for unwinding is sent to a harvest camp where his or her organs and limbs are stripped away and used for transplants for more deserving people. (In this futuristic world, the medical arts have improved so that any body part can be attached or transplanted without fear of tissue or organ rejection.) It’s a brave new world, and the reassuring thought is that the child doesn’t really die, but lives on in other people—although sometimes to alarming effect.

Shusterman bravely takes on this twisted idea and injects it with a cast of well-rounded characters, teens who come from different walks of life and circumstances, yet find themselves face to face with the same thing—their impending mortality. Or rather, their disillusion comes face to face with their impending state of dissolution. Connor is a troublemaker and doing lousy in school. His parents, at their wits end, choose to unwind him and when Connor finds out about it, he decides to run away. Risa is an orphan living in a state home. The state chooses to unwind Risa because “space in state homes are at a premium these days,” and she hasn’t excelled at the pace they would like. “It’s all right to be frightened,” they tell her, “Change is always scary.” Risa responds, “What do you mean ‘change’? Dying is a little bit more than a ‘change.’” Lev, on the other hand, has been preparing for this day his whole life, and he’s ready to go. His religious family plans to offer Lev as a tithe, he being their tenth child. On one fateful day these three children collide, literally, and their fates become intertwined as they find themselves on the run from a ghastly system that treats them like chattel. In this alternate future, there is no room for improvement. Once you are marked as a troublemaker, worthless, or just not good enough, you have no chance to prove those who judge you wrong.

Unwind obviously challenges the highly controversial subject of abortion. In this imagined world where abortion is illegal, unwanted babies get “storked”—left at the doorstep of a house or state home. Parents of unwanted babies can legally do this, and the families who get “storked” are obliged to raise the child. Lev is the tenth child due to his family taking in two storked children, but he is still eager to fulfill his obligations as a tithe until he inadvertently becomes a runaway. Slowly he realizes the horrific ramifications of unwinding and takes on an anarchistic role in ending the practice. But as a trope for the teen who can do no right, Unwind really gets to the heart of the matter. People can change for the better (and not the kind of change unwinding entails), if given half a chance. And people should not be defined by a few indiscretions in their childhood, especially teens who test the boundaries of their individuality. As preposterous as the concept of unwinding first seems, it begins to seem alarmingly possible in a world that allows for other atrocities such as the many genocidal bloodbaths happening around the world today.