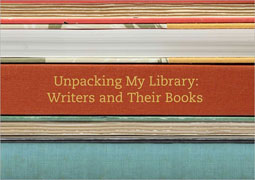 In the second title of Yale’s Unpacking My Library series, Leah Price interviews Alison Bechdel, Stephen Carter, Junot Díaz, Rebecca Goldstein and Stephen Pinker, Lev Grossman and Sophie Gee, Jonathan Lethem, Claire Messud and James Wood, Philip Pullman, Gary Shteyngart, and Edmund White. Each interview consists of a set of almost identical questions (though Pullman writes an essay for his response), and is accompanied by high-quality photographs of the subjects’ libraries, with a special focus on the top ten books chosen by each author (except for Bechdel, who provides eleven).

Some of the questions are: “How far back does your collection stretch?”; “Temperamentally, are you a pack rat or a toss rat?”; “Have there been periods of your life when you stopped reading?”; and “Are there kinds of books you keep in places other than the bookshelf—cookbooks, phone books, pornography?” Though the porn question often gets dropped or ducked, Díaz is ready for it. “I actually own no out-and-out pornography. If I did, I’d probably have it out on my shelves. I’ve never liked the idea of a hidden book. It means no one will ever randomly pick it up and have a conversation with you about it.” He ends this thread humorously: “I know you guys didn’t look too closely on one shelf, because there were stacks and stacks of role-playing games on it. Some of those are more cringe-inducing than any page-worn copy of Hustler.”

Given the opportunity to inspect the libraries of writers, it’s likely we’d look for matches with our own tastes, try to spot their influences, and note what writers or topics took up most of the shelves. Also under inspection would be the arrangement of the books and the set-up of the bookcases. Price asks about all these things and more. Bechdel has cardboard file folders labeled, for instance, “GAY COMICS MISC - QUEER,” and her books are situated waist-high along long walls, or over a television, whereas Carter has tall bookcases with a short one extending into the middle of a room. The effect is like moving from a college student’s library to that of a professor’s, and the multiplicity of storing and presenting books is one of the charms ofUnpacking My Library. The arrangement within the bookshelves also is worth commenting on. Goldstein and Pinker have white cubes, and the latter’s enthusiasm for “the joy of cubes” led to a television bit that’s available on YouTube. We get good views of the neat (Shteyngart, for whom bookshelves “add a sense of drama to the living room”), the aesthetically driven (Lethem, an advocate of built-in shelves), the messy (Pullman's library is partially blocked by guitars and an amplifier, while White stacks books on the floor, balancing lamps and telephones on them), and the precisely catalogued (Bechdel).

The photographs reveal occasional overlaps of taste. Plato appears often, but more intriguing is the high regard for Hergé. Tintin appears in three places: Bechdel’s top books contain Tintin in Tibet, Pullman similarly ranks The Castafiore Emerald (neither explain their reasons), while for Grossman and Gee L’Ile Noire is fronted on a shelf. Lethem, represented on the shelves of Grossman and Gee, shares with them titles from the same edition of the collected Peanuts, and has many books on comics. White has a copy of Wood’s How Fiction Works, and I wonder if Lethem does, too. It’s a pleasant surprise to see works by three of the industrious Powys family (John Cowper, Theodore Francis, and Llewelyn) in Pullman’s library, and amusing to contemplate, on the shelves of Grossman and Gee, Wyndham Lewis’s Tarr lodged near books by Stephenie Meyer. They also have a pitchfork leaning against a wall. Indeed, most writers have some objects in among their books, but Goldstein thinks that that practice qualifies “as what philosophers call a ‘category mistake.’” Many books by Bellow rest on Wood’s bookshelves, along with Hazlitt’s collected works; on Shteyngart’s, Philip Roth and Nabokov (and works in Russian) are well-represented; Pullman likes Trollope. Where Grossman thinks it “odd” to have his and Gee’s books at hand, White’s works rub against those by others.

As each writer brings their own particular answers to whether or not they keep every book they buy (most don’t, but find parting can be hard, though Pinker is “not sentimental about books as physical objects”), so their libraries offer readers (or viewers) much to consider about idiosyncrasies of taste when it comes to dictionaries, the role of the thesaurus, and book borrowing. Lethem is firm in this matter: “I hate lending, or borrowing—if you want me to read a book, tell me about it, or buy me a copy outright. Your loaned edition sits in my house like a real grievance.” Opinions vary on e-books and paper, though Claire Messud, wondering what will happen to her collection after her death, offers this perspective: “Doesn’t anybody but me ever imagine an apocalypse after which there is no electricity, no computers?” Further: “Anybody who thinks books are dispensable is someone entirely lacking in appreciation of sensual pleasure. I pity such a person.”

These and more topics are addressed, briefly and at times sharply, in Unpacking My Library: Writers and Their Books—in itself a sensual pleasure for the eyes, and a book fans of the writers, and of books and libraries, will enjoy.