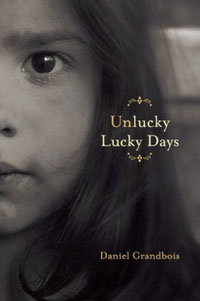 In a quip that’s become dangerously famous, Stephen Dedalus insists on aesthetic distance: “The artist, like the God of the creation, remains within or behind or beyond or above his handiwork, invisible, refined out of existence, indifferent, paring his fingernails.” Daniel Grandbois certainly fulfills the demand of Joyce’s surrogate in Unlucky Lucky Days, his debut assortment of fabulist flash fiction. The author’s nowhere to be found—not even in the penultimate entry, “The Author.” The story presents a portrait of the artist on a thumbnail, if not a pinkie-nail—indeed, nothing in the book runs so long as three full pages—and it eludes social and economic crosshairs. Instead it offers a few words about the sources of Grandbois’s fiction: a great-uncle’s photo, a daughter’s toy, the wife’s bedside reading. The brief piece charms, but its point seems obvious, a cheer for the unbridled imagination. “I dreamt of lion’s-head knockers loping through the neighborhood,” the Author explains, “ringing people’s bells.”

A brass lion’s head playing a middle-school prank seems typical of these metamorphoses. Unlucky Lucky Days divvies 73 surreal miniatures more or less evenly among seven sections labeled, as if he were a good Judeo-Christian, Sunday through Saturday. Yet the sensibility comes across as pagan; spirits reanimate the world’s common clay. One of the first to cast the collection’s peculiar spell is “The Prayer,” a relatively gloomy amuse-bouche. A Native American ancestor ceremony brings back to life the nightmare morning of 9/11, at the microscopic level of the prayer-blanket: “On closer examination, the hairs. . . were tall buildings with broken windows and people inside.”

With that glimmer of the high-tech present, Grandbois completes his recreation of Stone-Age myth. Similar last-minute reversals distinguish nearly all these dream-loops, sometimes healing and occasionally quite the opposite. The reversal, rather than the accident of where the Author got the idea, provides the impact. Consider “The Tunnel,” a Tuesday-piece here presented in its entirety:

A man and a woman stepped into a tunnel. It was lighter inside than they had expected. In fact, the deeper they went, the lighter it became until the light was so bright that it blinded them both.

Childlike yet chilling, both Tunnel of Love and Inferno, the story creates a climactic rush via the lack of commas and arrives at an irony rooted entirely in expectation upended. A number of other turnabouts are rooted in less—sometimes in as little as a play on words—yet nonetheless supply rightness and closure. At their best, these stories push cross-cutting valences to peak intensity, then abandon them.

In cases like “The Prayer,” when Grandbois strips his narrative onion, the reek recalls the kitchen sink—meaning on occasion there emerges a world we recognize. “Hat and Rack” might have to do with sexual secrecy (the final word is “closet”), and “The Sea Squirt” might make an environmental argument. But even when the stories lack such grounding, the writer negotiates the shoals of cuteness skillfully. He may work with a clumsy giraffe, with signifying wads of gum or, repeatedly, with articulate spiders (the jacket copy mentions Just So Stories, but Charlotte’s Web is also a touchstone), yet he nearly always strikes a balance between the ticklish and the haunting. Those wads of gum mutate into the Weird Sisters of Macbeth, then achieve the timelessness of geometry.

Just as “The Gum” makes use of Pythagoras, these stories prove rife with other texts, too much so for the children’s section. The language whirls into judicious puns, and it’s not averse to high rhetoric or subtle reference. Here Lolita teases Humpty Humbert into a great fall, and there we catch echoes of Bob Dylan. “Almost Borges,” in fact, may depend too much on bookishness; one has to recognize the dying old writer to enjoy the thrill as life comes to the household objects he so memorably invested with power.

Borges, what’s more, draped his fantasies with a larger cultural fabric, and Unlucky Lucky Days disappoints insofar as it lacks the same. Grandbois delights us in small, with his chiseled prismatic shards, but in large he frustrates the desire for greater vision, for the “conscience of the race” that Stephen Dedalus sought to forge. Such vision remains part of why we need book-length literary art; even the prankish young T.C. Boyle (an ancestor who goes unhonored here) dramatized the clash of the hippie pipedream and the American project. Still, these drifting, teeming Days merit the benefit of the doubt, since Grandbois shows every promise of taking on greater weight.