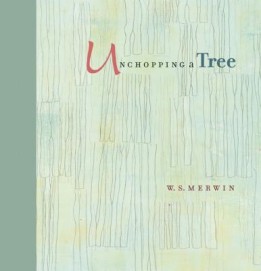 It has been well over half a century since W. S. Merwin won the Yale Younger Poets Award in 1952, at age twenty-five. Since then, he’s published prolifically, twice winning the Pulitzer Prize and once the National Book Award. He has always displayed an incisive literariness, but he has also managed to say something with each new book. Unchopping a Tree, focused on his ecological concerns, is no exception.

The title of this beautifully printed book may seem idealistically fanciful, as if somehow a tree can be “unchopped” after it has been knocked down. Merwin goes through a set of near-surreal exercises here, complemented by the subtle yet ennobling art of Liz Ward. So how does one undo damage? It can’t be done, of course, but Merwin lists steps as if it can—marrying the sawdust to the bark, enticing dead branches and leaves with a former luster. Wood chips, shorn from the essence of a tree, are “fitted back” in these untitled prose poems:

There is a certain beauty, you will
notice at moments, in the pattern of the chips as
they are fitted back into place. You will wonder
to what extent it should be described as natural,
to what extent man-made. It will lead you on to
speculations about the parentage of beauty itself,
to which you will return.

Human-caused damage, whether from harvesting for wood or clear-cutting for “development,” is what Merwin addresses here, but not in a political sense. Instead, the poet shames the reader into almost believing that such matters could be put right from the point of view of the forest and all those trees:

Finally the moment arrives when
the last sustaining piece is removed and the tree
stands again on its own. It is as though its weight
for a moment stood on your heart.

To say that ecological damage can be undone after humans have wielded their cutting tools is surely fanciful. But then again, so is poetry. This collection of pristine prose poems and delicately rendered art is surely a reminder that perhaps our wanton destruction of the planet can be reversed. Some might say, a single tree—who cares? The poet and artist here remind us that we cannot do so and remain ethical.