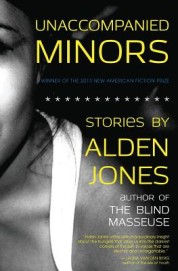 Alden Jones is a wanderer. In her travel memoir The Blind Masseuse (University of Wisconsin, 2013) she writes about her journeys from Costa Rica to Cambodia. In Unaccompanied Minors, her first short story collection, Jones’s characters can be found spending the night at a homeless shelter or minding children at a country club pool, hiking mountain trails or lingering on the litter-strewn streets of a down-at-heels tropical paradise. As the book’s title suggests, the characters here are mostly young, though not all are minors. Some of these stories are about women who love women; one is about a man who loves a young male prostitute. For all of these stories one thing seems true: the characters’ wants and needs are utterly peculiar to themselves. There’s something bracing—even slightly shocking—about the honesty of their desires.

As a traveling companion, Jones is full of surprises. The first sentence of the collection’s lead story boldly announces, “We’re in a homeless shelter in Asheville, NC.” It’s tempting to continue quoting, because you don’t expect a couple of broke girls who’ve been spending their nights on an Appalachian mountain with stolen camping equipment to be quite so brash about their choices. The story is short on plot but long on arresting detail, on the spasmodic, hyper rhythms of its language, and on its absolute disavowal of anything resembling victimhood.

In fact, one of the things that’s most refreshing, even heartening, about Jones’s characters is their refusal to be shut down by experience. The teen mom who gave up her baby and now takes care of a little girl the same age and the babysitter who bears witness to a family’s grief following a tragic accident play familiar female roles in unstereotypical ways. And this collection is perfectly ordered; by the time we get to the next story, “Freaks,” we are almost prepared for how disarmed we are going to be. It’s not completely clear what the narrator of “Heathens” is up to, because by the end of the story she’s willing to throw in the towel and admit she’s not going to get whatever it is she wanted. But the mere fact of her desire, and the bold and rather twisted way she pursues it, makes this story a rare glimpse into a do-gooder mission trip to a small Latin American town. The collection’s final story takes us back to the mountains, this time on one of those character-building wilderness rehabs that turns out to be a long slog through miserable terrain (as character-building so often is); one of the remarkable things about this trek is that, in the end, some character actually gets built.

Expect the unexpected from Alden Jones. Expect her characters to be up to no good, as unaccompanied minors often are. But be prepared for good to come of the rigorous honesty of her prose.