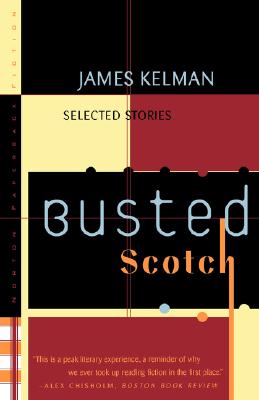 James Kelman's stories brilliantly render the amorphous, often wordless world of the mind as it putters about, not even thinking so much as just tending to its daily business. On the spoken word CD Seven Stories, he reads:

I have to clear my head. I need peace. Peace. Peace. No thoughts. Nothing. Nothing at all. Here I am as expected. The shoulders drooping. They have been strained recently. Arms hanging and the fingers, here, and rubbing my eyes to open them on the same again, here, the same is here again. What else.

This character, homeless or simply penniless, also describes his attire,his face in the shop windows, his hunger. Kelman's speaking voice—his Scottish accent, his slow, deliberate enunciations—lends the words even greater precision. In a brief note to his editor in Busted Scotch, Kelman writes:

I reached the age of twenty-two in the knowledge that certain rights were mine. It was up to me what I did. I had the right to create. I didn't have to write as if I was somebody not myself (e.g. an imagined member of the British upper middle classes). Nor did I have to write about characters striving to become other persons (e.g. imagined members of the British upper middle classes). I could sit down with my pen and paper and start making stories of my own.

His characters are frequenters of pubs and bookmakers, they are nightboilermen and warehousemen and the unemployed; they are waiting for the "giro," fretting over debts, grinning at the sun. There is an intense hopefulness in Kelman's work, a tenacious idealism that comes as a surprise amidst so much poverty and day-to-day oppression. And the gritty vernacular is more than a refusal to run a proper spell-check. It is a necessary component of his writing. Tired of the English Literature typecast of Glaswegians (or any working-class regional Brits) as thoughtless, brutal, wife-beaters who speak in fragments and don't know how to spell, Kelman has staked out this territory and given it full range and dimension.

Both Seven Stories and Busted Scotch fill in the gaps for American audiences who know Kelman only for the Booker Prize-winningnovel that took the publishing industry by surprise in 1994. How Late It Was, How Late had not been published in the U.S. before winning the Booker, though Kelman had in fact published several earlier books, including some provocative essays on politics and culture. He has made it his mission to legitimize literature in his own language and to stand behind the idea of writing as art, as an essential social practice. The Booker Prize, an appendage of the literary establishment he so freely criticizes, nevertheless has allowed him to work toward this end: being honored by this establishment has made it necessary for those who had previously ignored him to prick up their ears.

Busted Scotch gathers stories from twenty years of non-stop writing. Some are one-page sketches, just a single episode or conversation in a pub. Others are dense and complex, offering complete immersion into a mind or situation, presenting the course of a thought from its inception to its doubling back, its negation, its sudden leaps in logic. While a Kelman character may, on first sight, just be another guy on the street, he soon draws you in; his mind rattles off in a perfect intimate rhythm, making you want the best for him. Kelman's compassion, while not naive or unquestioned, has that kind of effect. Though there's an overall sense of futility when it comes to living a decent life and fighting the powers-that-be, there are also occasional moments of wonder, when suddenly a character amuses himself with his joy at the tiniest things—saying good morning to people, taking a walk, smoking a cigarette.

Kelman's work moves with a very particular rhythm, language, and dialect, and only occasionally is it difficult for American ears to decipher it off the page, as in "Nice to be Nice": "Strange thing wis it stertit oan Wedinsday, A mean nothin ever sterts oan a Wedinsday kis it's the day afore
pey day an A'm ey skint." This is why Seven Stories is more than simply another rendition of the same thing. His voice adds an important dimension to his work; it trains the ear for the written word and fleshes out the pronunciations. While the stories are in no way pretty, it's certainly a pleasure to hear the sounds and rhythms aloud. Obviously this author has spent a good amount of time listening to stories and knows how to read them as if he were telling them for the first time.

In the best of his work, Kelman reveals the way thoughts move from one to another; his characters are not espousing a particular philosophy or relating intricate memories, but deciphering the world around them from the only clues available. Whether spoken or written, Kelman's stories introduce a new language that speaks not only for working class Glaswegians, but for anyone whose mind might be addled by the dreck of living, but soars, now and then, within it.