THE SHE-DEVIL IN THE MIRROR

Senselessness, Horacio Castellanos Moya’s first book translated into English, appeared last year to seemingly universal and effusive acclaim. Now two more of this acclaimed Salvadoran writer’s works have appeared on our shores. Both are quite different from Senselessness, which was a bleak, Bernhard-influenced tale of a man hired by the Catholic Church to proofread a 1,100-page document containing the testimonies of villagers who survived government-sanctioned torture and slaughter. 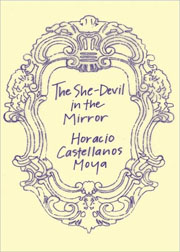 Originally published in Spanish in 2000—four years before Senselessness—The She-Devil in the Mirror is a less refined warm-up for that novel. Like Senselessness, it’s told in monologue, only the narrator here is an upper-class woman named Laura Rivera whose friend, Olga Maria, has been murdered. Laura narrates in almost real time, bouncing from opinion to conjecture to remembrance in the space of a few sentences:

Life is a catastrophe. How could this have happened to her? You went to her last birthday party, remember? She was so happy to be turning thirty—she said the best part of life was just beginning, always so optimistic, so vivacious. Those sons of bitches, those cowards, they should all be killed. Doesn’t her hair look great?

As Laura begins to investigate the murder in her chatty way, she learns that she is a suspect and begins to weave together the strands of a major conspiracy involving police corruption, prison escapes, and illicit affairs—only to find herself succumbing to paranoia as “Robocop,” as she calls the main suspect, comes after her.

Though it’s a full-fledged mystery story, the mystery itself is less central than her narration. Whether giving her political opinions:

He’s so different from that idiot we have for president now, that stupid fat old man, his own mother doesn’t even like him, I voted for him just so the communists wouldn’t win. Imagine what a terrible situation, my dear: we had to choose between that moron and the communists.

her thoughts on the sexual prowess of her ex-husband Alberto:

I like being on top, but not all the time. I’m telling you, I was always the one who had to be in charge: he just lay there in bed, with his undershirt and shorts on, like a plank of wood. Of course: he claimed that he’d catch cold if he took off his underpants and T-shirt. What a calamity.

her opinions on fashion:

Jesus Christ: look how those people are dressed. God save me. And that frightful-looking creature, where did she come from? Look at that one with the miniskirt: she looks like she’s a cellulite saleswoman. People no longer have any sense of the ridiculous, my dear; vulgar is as vulgar does.

or complaining about a friend (though it sounds like she could be describing herself):

What bothers me most about her is that she never stops talking; I swear I’ve never known someone who talks as much as Kati. She thinks everyone else needs to listen to all her nonsense. She just won’t stop: talk talk talk.

Laura’s nonstop, insistent voice becomes the novel’s driving force, revealing a contradictory and unreliable woman who is hard to label: she reviles most aspects of religion, yet people who are anti-torture are “human rights communists.” She refers to everyone as “my dear” in a way that is both charming and insulting. Through it all, Laura’s really talking about—even though she most likely does not know it—the corrupting nature of power and money, the downward spiral of society, and all the layers of pettiness that often define who we are.

At one point in She-Devil, Laura mentions her friend “Rita Mena, the reporter . . . she’s a compulsive liar, ever since she covered that story about the snakes; do you remember that huge scandal, about that maniac in a yellow Chevrolet full of snakes who went around terrorizing the population a few years ago?” She’s actually recalling the plot of Dance with Snakes, a novel that is, in the very best spirit of the phrase, batshit insane. In it, we find an unemployed sociologist who is unhappy; when a homeless man living in a yellow Chevrolet begins parking in front of his apartment building, he sees a chance to change his life. He switches identities with the man and begins living in the car, only to find that the man keeps four snakes as pets—snakes that talk to him and do his bidding. He then goes on a spree of murder and destruction, commanding the snakes to kill anyone in their way. 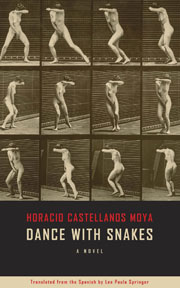 Dance with Snakes is essentially a thriller, and Moya uses the conventions of the genre to create a terrific amount of suspense and terror. But once we get to what is easily one of the most bizarre and discomforting sex scenes in all of literature, it becomes clear that—as with his later She-Devil in the Mirror—Moya is only constructing a traditional thriller on the surface. As opposed to She-Devil, however, the narration here is very straightforward; we have no reason to doubt the veracity of anyone’s claims despite the fantastic nature of many of them, as when the sociologist describes his interactions with his adopted snakes, which he calls “the ladies”:

The din outside was tremendous. The ladies were in a kind of orgy, biting everything in sight. I had closed the door and window to block out the screaming, but I could still feel the terror of the fleeing crowds beating in my eardrums. In just a few seconds the street had been destroyed. There were dozens of bodies lying twisted on the ground between the vendors’ stalls, as though there’d been a machine gun attack or an earthquake. I thought we shouldn’t call too much attention to ourselves. I opened the car door and yelled for them to come back. They came in excited and out of breath. I started the car while they gossiped like maidens in a tearoom, which was unlike them.

Dance with Snakes is the more “pulse-pounding” of the two novels, for sure, but both offer up incredible characterizations and Moya’s takes on the political situation in Latin America, with plenty of barbs directed at religion and the police. Hopefully we will see more of his fiction translated in the coming years.