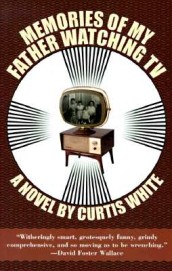 The existence of a novel like Curtis White's Memories of My Father Watching TV may be adequate grounds to justify the formation of a flotilla of barges, tugboats, and little yellow rubber rafts to transport 95% of the memoirs that have been published in the last few years from the sandy shores where they're being read to some suitably time forgotten land. Adios, "hard-hitting and poignant" friends! Next stop- Fahntasy Islahnd! Why not? If the literary establishment is going to devote a large part of its cumulative energies to writing, weighing, and praising family recriminations, the genre could do worse than to linger over that big box in the corner of the living room.

Memories of My Father Watching TV begins with a schematic of a family's relationship to itself: three children desperately attempting to capture the attention of their father, who has secured himself before the tube. Chris, our narrator, connects with his father only by watching television programs with him, imagining his father into these programs while shaping the programs to contain him. What follows are eight chapters, named for the shows of the '50s and '60s with which the book deals (e.g., Bonanza, Highway Patrol, Maverick, numerous TV quiz shows), that explore aspects of this transmutation, parodize the programs themselves, and slyly analyze Chris's/ Dad's/our collaboration with television in its role as State bulwark.

Chris's attempt to achieve a unanimity of "experience" with his inert father through the intercalation (or complicity in hisfather's intercalation) of television is a bust—for of course TV's rationale is based on the massive Don't Bother its mediation demands. Having gone native against cardboard backdrops (which is what we all do whenever we identify with "Our Shows"), Chris finds that not only are the inadequacies of the televisual tropes he seizes upon to reinvigorate his father apparent, as in the "Have Gun?Will Travel" chapter—

We have been led to believe that this Americano is "like a force of nature . . . pestilence, drought, famine." Imagine our keen disappointment and contempt when it turns out that this "force of nature" is only Robert Wilke, a large, loutish, talentless B-actor that we have seen on every variety of TV serial . . . [H]e is not a force of nature: he is a force of televisual cretinism—but they have overtaken and supplanted the Real (so to speak): "The outside has disappeared," an Animatronic Krushchev says. "See there, nothing in the distance but a flat buzzing. That is not life you hear, that's just heavy breathing." 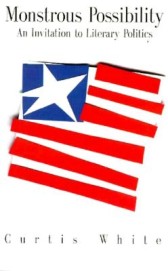 If this sad and funny book depicts a passive relationship to the postmodern moment, the book itself is the sort of "strategic response" White outlines in Monstrous Possibility. To White, monstrous possibilities are what the postmodern presents, its "monstrousness" stemming from its nonlinearity, its appropriativeness, its unpredictability, its disregard for and pirating of Tradition, Leavis-style. As a result, White says, "it has never failed to feel itself involved in an antagonism of some sort." White's response to such persistent antagonism is this "Invitation to Literary Politics," 11 essays originally published over a 13-year period. Assembled with maximum cohesiveness (or maybe it's that White's critical temperament is so integral to his practice as a writer that the same essential spirit pervades each essay whatever its subject), the book shows that White's mind is clearly made up on some primary issues, which I will now grossly oversimplify: Artists have a duty to the imagination. Intellectuals have a duty to have, understand, and respond to ideas. The importation of theory was an invigorating event in the development of U.S. literature. The canon-making process is a scam (now brazenly exposed by the Modern Library star chamber). The mainstream left (this likely oxymoron is mine) media, in its zeal to retain its pulpit before its assembly of the converted, is flagrantly hostile to an actual avant-garde, which survives (as usual) in the impecunious dark.

OK, good enough. This is a man I can call Friend. As a writer, academic, editor, and publisher, White knows what he's talking about—and he can persuade. The above sampler by no means encompasses all of White's various beliefs, and does nothing to convey his eloquent erudition, the complexity of his ideas, his sense of humor, or (an especially interesting aspect of the book) the evolution of his thinking: for example, the White who in 1987 wrote that "contemporary writers . . . suffer from no illusions about the desirability of a willed alienation from their culture" because they are working in universities, "an instance of primary involvement that writers can claim as valuable" ("A Literature in Opposition: Reconstructing the Future"), had by 1996 acknowledged that "the most interesting fiction coming through FC2 (the publishing organization I co-direct) is from people in frighteningly impoverished and socially marginal conditions," and was reconsidering his assumptions about the security of the English department's place in the university ("Writing the Life Postmodern"). Likewise, the White who in 1992 was encouraged by the "recent victories in the curriculum wars by feminists, multiculturalists, gay rights activists, postmodernists, and of course neo-Marxists" ("The War Against Theory"), by 1997 takes a more guarded view, at least regarding the relationship of such developments to a postmodern "aesthetic" (itself a problematic concept, he argues) ("I Am Artist; I Make Beautiful Things: A Credo of Sorts Concerning the New Beauty").

Monstrous Possibility had me rethinking positions simply because they are, at any time, rethinkable. It's not necessary to agree with White's conclusions to see the potential in following his guidance to arrive at different ones. I suspect that White would applaud it.