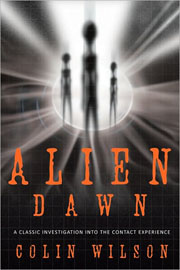 In the 1940s, George Adamski claimed to have been taken to Venus in a flying saucer. In the 1990s, hundreds of people claim to have been taken from their beds by little gray-skinned aliens with huge black eyes, transported aboard a UFO, and subjected to medical examinations.

Alien Dawn is Colin Wilson's encyclopedic attempt to shed light on this phenomenon. Wilson, who has written extensively on philosophy, literature, and the occult, brings an interesting perspective to this field of study. His primary areas of interest are alienation and the expansion of consciousness; throughout all of his work he has maintained that mankind is on the verge of the next step in the evolution of consciousness. Alien Dawn continues with and expands this theme. Many "abductees" report heightened awareness of the universe and their place in it; abductee Beth Collins, when she asked a "gray" why he was driving a needle into her navel, received the reply, "It is part of the change." Wilson's conclusions suggest the possibility that the "aliens" are manifestations of our own consciousness, emerging as we lead ourselves toward a heightened level of awareness, and that, although we don't comprehend the processes involved, we are the expediters of our own development.

Wilson finds intriguing relationships between these UFO abduction allegations and ancient folklore. He notes that abduction reports bear startling similarities to earlier "mythologies" of abductions by fairies, and that "missing time" episodes, prominent in abduction cases, have been present in occult literature for centuries. And how can UFOs seemingly defy the known laws of physics? Wilson points out that most scientists refuse to pay attention to the paranormal, "so the 20th century still found science busily trying to create a 'theory of everything,' while refusing to look at half the phenomena." In a remarkable chapter, Wilson finds that experiments in quantum theory and particle physics have led science in some peculiar directions. Physicist John Wheeler has claimed that a photon does not become solid until observed; Wilson says, "This is, of course, the position expounded by Bishop Berkeley in the early 18th century-that our 'senses' create the world, although its existence is sustained by God." Quantum physics has suggested that what we think of as matter is, in fact, vast seas of "zero-point energy" which create "matter" from vibrations. "So even our science is beginning to point towards a strange new conception of the universe: as vast tides of energy, inhabited by minds that can tune in to it, and exert some control over it."

A quick count of the books in the UFO section at the local "superstore" reveals a total of 123 titles. Anyone attempting to work their way through the literature would find ample reward in beginning with Alien Dawn, an exciting look at what could be an evolutionary force working in our midst-and an intriguing glimpse into the mind of an exceptional thinker.

If it can be argued that we are the sum of our experiences, part of that equation must include the books we read. Colin Wilson's The Books in My Life, half autobiography and half literary criticism, chronologizes the important works that shaped his own philosophy as an emerging reader and writer. An avid bibliophile-Wilson's own collection of books, filling his country home near Cornwall, numbers nearly 30,000 volumes-he had to "exercise the utmost self-discipline" in deciding which books to discuss. The ones he chose, ranging from obscure British adventure writers like Jeffery Farnol to the staid canonical legends such as Joyce, Sartre, and Hemingway and on to sadly forgotten figures such as Artsybashev, reflect important phases of his youth as he became influenced by or rejected certain writers' values and ideas.

Wilson's relationships to the 30 or so authors he presents are highly personal, and he enjoys arguing with them, refuting the negativity so prevalent in 20th-century novelists and philosophers-the existentialism and nihilism fueled by romantic delusions of reality and a heightened sense of self or ego. Wilson, as everywhere in his work, here expounds his more life-affirming beliefs, of which hints can be found in The Varieties of Religious Experience, Thus Spake Zarathustra, and Man and Superman. In works such as these, Wilson says, there are moments when the protagonist catches an intimation of the mind's power to see beyond his "worm's-eye view" of the self and world: "I have always believed that the solution to our deepest problems lies in knowledge, and therefore in the powers of the mind. Intellect is the most powerful instrument we possess. And the next stage of our evolution will be brought about by a brilliant flash of insight, when we shall suddenly grasp what we already know, see it from above in a 'bird's-eye view.'"

The most satisfying thing about books, of course, is that they lead to more books. Wilson's reading habits mimic the deductive investigations of Sherlock Holmes (about whom he writes in chapter five); thus T. S. Eliot leads him to T. E. Hulme, the Bhagavad Gita, and Ernest Hemingway. The young Wilson's hunger for new ideas knew no bounds, and his desire to find himself, and to articulate the emotions boiling within him, drove Wilson to read anything he could get his hands on. Personal anecdotes intermingle with synopses of novels and writers' lives, as Wilson compares his own experiences of budding sexuality and love with the travails of characters in A Farewell to Arms or Faust. The need to understand these books-to critique the message-becomes urgent, as they reflect the people we are. If we are driven by nihilism, then the values we espouse will reflect a sense of meaninglessness; sudden glimpses of hope may jolt us out of that state only momentarily. But Wilson believes we can train ourselves to control our emotions, to direct our attention with a will to overcome self-pity and self-absorption. The books in Colin Wilson's life are those that propel him to these heights of thought. His books in turn do the same-they make us think.