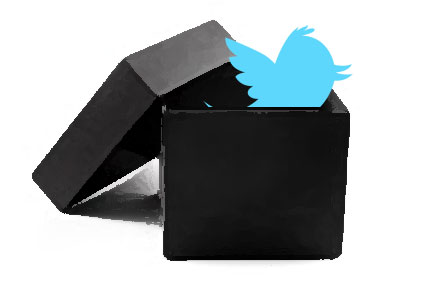 Jennifer Egan’s 8,500-word story “Black Box,” released earlier this summer over a 10-day serialization on Twitter, was met with much hand wringing by those worried about The Fate of the Book. How could anything serious be said in 140-character bits and pieces? Doesn’t the superficial Twitter platform preclude the nuance and heft we expect of literature? And wasn’t The New Yorker’s Twitter gambit a mere publishing gimmick, a wretched example of literature co-opted by encroaching corporate technologies?

The story of an alluring female spy attempting to gather information on a suspected white-collar terrorist, “Black Box” is a thriller peppered with elements of science fiction. As narrative that flaunts more dulce than utile, “Black Box” has less to do with the quality of its content than with the highly unusual circumstances of its transmission. The “publication” on Twitter of a Pulitzer Prize- and National Book Critics Circle Award-winning author was a noteworthy media event. Yet The New Yorker seemed concerned that it might be crossing a dangerous line—the magazine was prudent to publish the story in print concurrently. Too bad The New Yorker wasn’t audacious enough to rely solely on the electronic feed, because the readers who followed “Black Box” on Twitter were treated to a thrilling new kind of read.

If you followed Egan’s tweets for an hour each evening, there was a certain frisson in realizing that, as “Black Box” unfolded on your small screen, it was also unfolding on the smartphones, tablets, and computers of numerous thousands of other readers. The personal luxury of being solitary and attentive was combined with the socially satisfying awareness that other people were indulging in the same activity simultaneously, in real time—a type of shared reading unprecedented in the history of literature. And if you consumed the story on a sleek device in a dark room, you were also treated to a sensation akin to that of the movie theatre experience—of relishing a relaxed time in a cozy, dim place, intimately near yet comfortably separate from strangers, as you together-and-individually savored an appealing dramatic narrative. A story Twittered, then, alters and enhances the very experience of the experience of literature.

Perhaps most unique to this new reading practice were the sixty-second pauses between tweets, pauses which served as technological reinforcements of the story’s plot suspense. For some readers, the pauses were moments of meditation that encouraged thoughtful reflection, moments in which readers could unhurriedly ponder and appreciate each tweet without being rushed onward. For other readers the pauses were opportunities to retweet or connect with others—for no doubt most Twitter users were checking their email and other social media accounts at the time. The pauses were like television commercials without the commercials—time to check if the rice was done, or brush your teeth, or pour yourself a glass of wine. After all, you could easily let a few tweets accumulate and still follow the story’s transmission. Strangely, life between the tweets seemed oddly surreal and detached compared to the extraordinarily engaging fiction happening online.

Consuming fiction on Twitter, then, is not necessarily shallow, evil, or demeaning; on the contrary, “Black Box” heralds fascinating possibilities of how our notion of reading might evolve. But what of the story’s content, its literary worth?

There’s no doubt the story makes valid claims to be “substantial” (intricate, relevant, original). Unlike most tweets, “Black Box” was not a text spun nonchalantly off the fingertips of a driver veering precariously in her lane on the New Jersey Turnpike. Egan approached the project with the utmost seriousness, and her method of writing was decidedly un-Twitteresque. She claims she spent over one year thinking about, writing and revising the story—and she did so using a very special (and mobile!) technology: pencil and paper. Composing in a special notebook made in Japan, Egan faced Twitter’s 140-character limits like a poet grappling with the formal challenges of a haiku, as when, in one tweet, she compares a moment of self-discovery to “a dream in which a familiar home acquires new wings and rooms.”

The story’s leitmotifs seemed to have been planned with similar careful attention. The narrative touches on a host of controversial issues: terrorism and patriotism, sexism and gender relations, identity and masks, and the integration of technology with the human. Though some of these themes are not so subtly presented in the short story (e.g., beautiful women giggle, criminal men are rapists, outward appearances obviously belie inner realities), the story slowly but surely accumulates greater significance, eventually achieving the multifaceted complexity of Literature.

To an extraordinary degree, the story also encourages an active, cerebral engagement on the part of its readers. Egan deserves much credit for assuming that her audience is endowed with a certain interpretive sophistication; rather than spoon-feeding us meaning, Egan relies on our participatory intelligence to bring the story to full fruition. This faith that her audience can contribute to the creation of the text’s significance—one of postmodernism’s more important tenets—may be taken as a high form of compliment to Egan’s readers.

Thus Egan can blatantly present sexism in the story, knowing that the audience can parse and critique it. And when she writes about the Data Surge—”You will feel the surge as the data flood your body”—she knows that we share certain key assumptions underlying the story: for instance, that the information age can be utterly trite on the surface even while it somehow affects our deepest emotive core. Or when the main character gazes at the moon and remembers her sympathetic, virile, and successful husband, Egan can assume that we are aware of the story’s deliberate manipulation; we are proffered cliché imagery of soothing nature (“The moon can seem as expressive as a face”) and fed the sentimental fantasy of a perfect husband. Yet despite our awareness of the story’s obviously suspect constructions, we are nevertheless moved emotionally—in the same way that Beauty is moved into a feeling of solidarity with the other beauties even though she is merely an imposter: “Kindness feels good, even when it’s based on a false notion of your identity and purpose.”

In short, the genius of this story is that is works effectively on at least two levels—that of the exhilarating spy thriller, and that of a postmodern text, full of paradox, playfulness, and sophistication. Egan seems to urge her readers to enable a double consciousness, much as Beauty enables her own double consciousness throughout her fictional ordeal. Take delight in the story, Egan encourages us—admire the pretty heroine, the glamorous Mediterranean setting, the 007 action sequences—yet also step back into an analytical perspective on the story’s themes. Enjoy the non-realistic “genre” aspects of the story, but no matter how inane they are, don’t forget how they point to troubling ideological assumptions undergirding our culture and society.

Perhaps the most pioneering aspect of “Black Box” is the way it creates a unique fictional discourse comprised of what Egan calls “terse mental dispatches.” The story seems to record the thoughts of the protagonist, but not as first-person, nor in the close-third-person as that perspective is typically deployed. Instead, Egan has invented a subtle but significant variant on free indirect discourse; whereas normally this style morphs the third-person point-of-view so that one can hear the idiosyncratic voice of the character seeping into it, in “Black Box” an omniscient or outside voice is transferred into the mind and voice of the character.

Such “mental dispatches” vary from so-called universal truths (“Experience leaves a mark, regardless of the reasons and principles behind it”); to lessons acquired in training (“An angry subject will guard his words less carefully”); to personal reflections (“Fatherless girls may invest the moon with a certain paternal promise”); to internalized instructions that border on commands (“Always filter your observations and experience through the lens of their didactic value. / Your training is ongoing; you must learn from each step you take”). One result of this newly honed point of view—in which the voice of the individual has fully absorbed the creeds and doctrines of her social group—is that the distinction between the personal and the cultural becomes blurred, even erased.

Indeed, the working title of Egan’s story was “Lessons Learned,” and in virtually every tweet the text illustrates how thoroughly the protagonist has absorbed not only the practical wisdoms of her training as an undercover agent but also the ethos of her culture, the tenets of her tribe. This observation points to the most significant messages the story conveys: that our thoughts are not our thoughts (they are culture’s thoughts), and that even our intimate experiences are filtered through limited emotional constructs learned from society. Rather than despair at such apparently bleak conclusions, however, Egan’s story suggests we should approach them with an HTML-era mindset—one that accepts the limits of authenticity by embracing masquerade with a stoic playfulness and with a highly engaged intellect comfortable with irony and paradox.

Was the distribution of “Black Box” on Twitter merely a publisher’s gimmick? Who cares? Give us more! And thank Jennifer Egan for setting the bar high. Let’s keep our fingers crossed that the quality of future Twitter Fiction will also hit such brilliant marks.