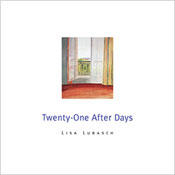 A spectacular meditation on so many things, Lisa Lubasch’s Twenty-One After Days is simultaneously very tightly woven and entirely fragmented—and both of these aspects of this long poem make it lovely.

The poem’s form begins as blocks of texts, broken up into line-like bites by dashes, visually reminiscent of Emily Dickinson’s punctuation. When read aloud, it recalls Alice Notly’s The Descent of Alette, with its prescribed pauses and breaks. There is a productive confrontation between the visual and the auditory aspects of the book: “we grow subtle—in the narrations of our fingers—it all goes well—enough—by being rubbed into consensus.” The units of text seem orderly in their size, but notice how that “enough” disrupts everything; had it been it all goes well-enough it would have sounded very different. In addition, the physical splicing of lines suggests at least the possibility of a fragmentation in a complicated and thoughtful way—in that it’s never clear how much Lubasch has reorganized—a wonderful thing to ponder in a book like this.

The form goes on to take many other shapes throughout the book, including composition by field and traditional “skinny on the page,” but one of the most surprising forms is when the blocks of text remains and the dashes are absent. In the first half of the book, there are two notable places where this occurs, each within the first two sections: “Then a blanketing would occur, upon the earth, as splendor, translucency, yards of us running, steadily, wedded, to an inner logic, the field misted, filled with condemnation . . .”; and “Where weariness is, sunlight resuscitates, growing into rims of inattention. Clouds are booths, redundancies, shapes. Marks are drawn, so centers can be formed.” These two points in the poem provide, suddenly, beautiful ease in reading, akin to swimming without clothes after having been swimming in jeans and a flannel shirt (one of the many tests in life-guarding classes). The feeling of one affects the feeling of the other in this extremely fruitful juxtaposition.

Another delightful preoccupation in this poem is writing. At times it can sound almost like literary criticism, but Lubasch deftly turns such phrases into remarkable poetry, as in: “greedy narratives—where the poem boils over”; “our obvious desire, to make a theatre of our concerns . . . The body, slippery, is a script, walking, penitently, all abandonment, is in turn, metrical, a complaint, launched, branched out of it, traced a new direction”; or “Hovering there, on the sill, / as everything / moves towards revision . . . The room is unmoving, / but its punctuation / is stirred.”

The idea of writing and the space which it consumes come together both on the page, as Lubasch navigates the beautifully unconventional size of her books (8.5 by 8.5 in.) and in the text, with repeated mention. The theatre image seems especially pertinent, as the stage is a space in which something two-dimensional (a script) becomes three-dimensional. Perhaps one of most exciting examples of this confluence of space and the speaking of text occurs here:

it stands in place—affirming its location in the field—

one way of saying—

that the first person—resists its own disruption—

Lubasch here conjoins many of her concerns, and the effect is tremendously satisfying. Part field poem (and self-consciously so, upon mention in the first line) part fragmented discourse, and still brilliantly caught up in attention to the act of writing—using a third person pronoun to rebuff the subsequent mentioning of a refusal to use the first person—Lubasch’s performance of the text gives immeasurable texture to her work.

Finally, by setting all of this within the repeated context of the home—"A lamp is reading, producing a devastating effect” —Lubasch goes beyond narrative to discuss the structure behind it, in which “literary strands—flit bemused—about the house—.” This revealed scaffolding proves to be just as intriguing as anything else, as all those thoughts that may, in the context of the theatre, appear to be mere supportive roles are recast in the home as the leading ones. As Lubasch writes, “if you begin with truth—there’s almost nothing left—by lunch.” Twenty-One After Days proves with awesome grace that truth can just as easily be found in a stunning discussion of itself as in any plain narrative sitting on a page.