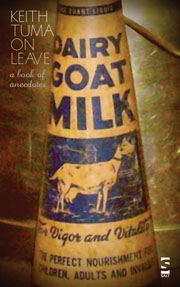 What a bad title for such a good—and, paradoxically, ambitious—book: though it presents itself as a low-pressure journal, the inconsequential deeds and recollections of a senior professor in a sabbatical year, On Leave unfolds to reveal a meditation on the anecdote as a form; an elegant sketch of grief, and of partial recovery; a calm revolt against the conventions of one-point-in-front-of-another, stiffly ineffective, argument about modern poetry; and (best of all) an amenable introduction to the sometimes prickly, too often unapproachable “avant-garde” (or, if you prefer, “post-avant”) poets in Britain, Ireland, and America, among whom Tuma has made his lit-crit career. If you are not already reading Trevor Joyce, Tom Raworth, Bill Griffiths, or Rae Armantrout with pleasure, or if you have tried and failed, Tuma’s offhand admiration for the poets and for their poems might let you try again.

Before we get to the parts about the poets, we have to get used to the journal as journal, whose disconnected paragraphs record disjoined parts from a year in Tuma’s life. We read about international travels, headline news (it’s 2007-08, and Obama runs hard), sports (the Cubs, up and down), and sadder life-changing events: Tuma’s mother grows ill and dies in the course of the year. We meet the critic as father and husband, as grieving son, as owner of an aged dog, taking walks by a river in southwest Ohio (Tuma teaches at Miami University Ohio), leading just the sort of “real life” that realist fiction emulates, the sort of life that some people think avant-garde poetry, with its opposition to transparency, to the picturesque, to the taken-for-granted, cannot present.

Those people, Tuma’s work implies, are wrong. “Avant-garde poets claim to hate anecdotes or the anecdotal style,” Tuma complains, “though what they really hate are the way those anecdotes are framed”: wrapped up with a moral like a gaudy bow, or slotted into a story of transformation, growth and epiphany. Framed in weirder ways, or just hung on the wall, the same anecdotes can provoke thought, lead us to read on, as they do (Tuma shows) in the disconnected, open-ended collections of anecdotes about artists and writers, from Drummond of Hawthornden onwards through Hazlitt and Elbert (not L. Ron) Hubbard, that Tuma intermittently emulates here. Avant-garde poets, this form says, are people too: even J. H. Prynne, the famously difficult, forbiddingly intellectual, Cambridge writer, is a person, and in his own person attracts the kind of storytelling that his poems repel.

“Only those who have personality and emotions,” says T. S. Eliot, “know what it means to want to escape from those things,” and to read a difficult modern poem—whether it’s Eliot’s The Waste Land in 1922, or Armantrout’s Money Shot today—you could do worse than make educated guesses about what the poets have tried to escape. Tuma can help us guess: his stories about his favorite recent poets reflect on their work, and also thank them for their collaboration, their involvement with a literary community that is more than the sum of its poems: “that’s the spirit I associate with the world of small press poetry, the world I have been remembering here.”

Tuma can also gloss individual poems; he quotes them, appropriately and sparely, sets down his reactions and moves on, to the Cubs, or the dog, or back to Samuel Johnson, and to the next day. You won’t find high-energy interpretive arguments here, but rather a journal that shows how it feels to admire these poets, these poems: Tuma convinced me, as it were, by his presence, to try again with several rebarbative British and Irish writers (Trevor Joyce in particular) whose powers have not come across, or not to me, in Tuma’s earlier, more academic, attempts to select the best of their work.

Anecdotes seem to deny history—they stand on their own, they get traded like shells, or like coins—but they have a history, as do all forms: Tuma begins and ends with some self-consciousness about what “anecdote” means, a self-consciousness that works against the informality of his tone. There are other books about poets and poems that work this way, but unless you count The Grand Piano, the recent “collective autobiography” of the West Coast language writers, they are not books about the (cough) post-avant; they are books on the lives of the so-called confessional poets, prized for their anecdotes whatever else they contain (Eileen Simpson’s memoir Poets In Their Youth, for example), and nineteenth-century books about the Romantics (Hazlitt’s My First Acquaintance with Poets), and earlier collections of disconnected remarks and events, such as those around Dr. Johnson. It’s an exalted, as well as a casual, company; Tuma’s short, welcome book belongs there too.