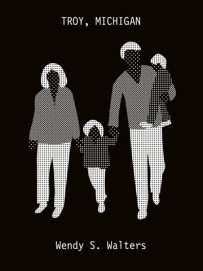 How does racism make a space? In Troy, Michigan, Wendy S. Walters turns sonnets into maps that document the terrain of oppression. If a collection of sonnets seems like an archaic approach to confronting the structures that enable racism, consider: sonnets and suburbs both concern themselves with imposing order on what is deemed unruly. Aren’t the suburbs—isn’t America—primarily concerned with “triumph over topography,” and can the desire to control the land ever be separated from the desire to control who inhabits it? Isn’t a sonnet an efficient tool for drawing new boundaries—the line taking the place of the surveyor’s rod, the octave and sestet sketching out the shape of a plot?

Walters’s vision roams freely over the landscape. She peels back layers of history to show the connections between the Troy of antiquity, the settling of Michigan by whites, the rise of the automobile and the suburbs. “Founding,” a crown of sonnets, traces the history of Troy, beginning and ending with the exhortation, “Start with some common interests in escape.” A fall is pre-ordained, inscribed in the name: “A Troy made again / invites myths of walled cities and idols / of speed into the woods to undo us.” Paranoia becomes inextricable from a sense of place: “A fear of mixed-use / space reflected mistrust, a solitude / philosophy.”

In “Prologue, 1970s,” our attention is directed to “snow in right neighborhoods outside one / gray city.” A resonant word, “right,” with its echoes of both angles—as in construction, development—and morality. The nuances of that word are useful to keep in mind, as studies show that even when people of color do everything “right”—graduate high school, get married before having children, find full time-work—they are less likely to be granted the trappings of middle-class life than their white peers.

Walters sketches out the contours of this world with its brutal logic and inviolate rules, then zooms in on one particular resident of this landscape: the speaker herself. Speaking alternately from the positions of I, she, the writer, and our girl, Walters seizes the power of multiplicity. Sonnets and suburbs have historically valued a stable self and Walters’s shifting voice is a welcome departure from this tradition. Midway through the book, a girl appears, hiding in the desolate woods “from those who don’t seek her out.” Is this girl the poet? She is more than that:

The writer illustrates our girl’s worries
as a wall of windows. Look out. See how
she waves as she walks up the road? She wants
you to join her, but you can’t catch up.

Angry and sad that the white world won’t acknowledge her value, this girl still affirms: “I remain.” The Troy of Walters’s poems may not be the stuff of epic, but as the poet tartly reminds us, “This saga / matters as much to me as epics do / to everyone else.”