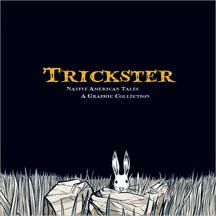 Storytelling is as old as humanity. We tell stories to share a laugh, to communicate knowledge and experience, to persuade and to entertain. And though professional storytelling has become relegated, for the most part, to elementary schools and children's events at the library, it lives on in certain folk traditions.

Native American folklorists have preserved the habit of oral storytelling, of gathering listeners around the metaphorical campfire to recite tales of wolf and raven, and of transporting their audiences to worlds of the imagination. Trickster: Native American Tales is the next best thing to a live storytelling event. It's a graphic anthology of Native American trickster tales rendered by a talented crew of illustrators.

In these short graphic tales, readers will encounter one of world mythology's greatest archetypes, the trickster—a wily and mischievous character that, in these stories, can be a human or an anthropomorphized animal. Coyote is a favorite trickster. He trips and scatters a pawful of pebbles that spread across the night sky, creating the stars. He swallows Horned Toad Lady and gets quite a bellyache. He saves the wind, the Chinook, from a greedy bear.

These tricksters come in all shapes and temperaments. There's a raven that clomps along the seashore giving each sea anemone he encounters a good swift kick—because he can, and because he delights in disruption. And then there's the serial killer beaver who lures four brothers to their deaths; apparently dam building and gnawing wood have deranged his small mammalian brain. I guarantee you will never look at a beaver in the same way.

Editor Matt Dembicki gets kudos for casting his net wide and reeling in storytellers from a number of Native traditions. The tales play out on coasts, in the sun-parched Southwest, and on piney northern slopes. Dembicki has also showcased a number of artistic talents, who've used their skills to translate the stories into graphic panels that span a range of styles. It's a suitable match up, an almost inevitable marriage between oral tradition and a literary art form that seeks to replicate speech in word balloons.

While not every graphic story here is equally successful—some styles look a little wooden or naïve—Trickster offers what you’re supposed to get in a collection: variety. Thus, what appeals to any given reader will be a matter of personal taste. But the stories themselves, about wildcats, buzzards, rabbits and raccoons, shine like the pebbles a bumbling trickster coyote once flung across the night sky.