It’s a good time for visual poetry. The genre is expanding its influence through an increase in practitioners, and innovative composition methods are constantly being discovered and adapted. Publication technologies have advanced and become mainstreamed for more poets and publishers interested in mixed-genre work. Some of the factors that used to limit the large-scale dissemination of visual work (color printing costs for image-based poetry, for example) are circumvented or minimized by the online environment and the accessibility of desktop publishing software. Not only does technology come into play in the production and publication processes, it also provides a field for complex and fertile poetic association. For visual poetry especially, the conceptual coordinates of Self, Spirit, Body, and Techne can manifest in unexpected, innovative explorations that lead audiences to new insights of their own.

A visual poem cannot be reduced to a single, standardized interpretation. The textual and pictorial elements (and the implied aural elements) are equally necessary to a full reading of the piece. Although it is possible for audiences to engage the elements of some visual poems separately, to do so would yield a very different experience from that gained by taking the piece as a whole. This is a good thing, because it exponentially increases the potential impact of any one poem. This multidimensional capacity allows visual poetry to be a particularly suitable environment for grappling with the spiritual. In a 2007 essay introducing the catalogue for an exhibition of visual poetry from the Avant Garde Poetry Collection of the Ohio State University Libraries, John M. Bennett suggests that “visual poetry is especially useful for dealing with and presenting this multivalent/multiconscious experience of the world.” If a spiritual experience is “multiconscious,” visual poetry has room for it.

Rather than discussing the emotional impact of the spiritual, or attempting to describe a spiritual experience, some visual poets are able to transmit a spiritual experience directly to the viewer through image and text. Both John Martone and j/j hastain use combinations of text (or text fragments) and image (or image fragments) to craft poems with an undeniable spiritual turn. Yet one cannot say that their work is “about” spirituality or emphasizes a subjective, “airy” spiritual experience over the daily work of living an engaged life. Spiritual ways of knowing are grounded in a physicality that works on a number of levels. Because the poems of both authors are also physical objects—autonomous creations apart from and a part of their books—there is a resonance between the “body” and the “spirit” of each piece (as there is for their authors and audiences). The inherent multivalence of the medium also provides an even greater range on which the works can interact with one another. 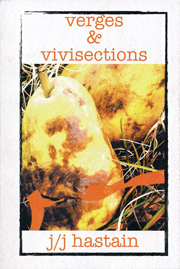 The pieces in j/j hastain’s Verges & Vivisections are composed of abstract photographs taken by the author, with strips of original text superimposed upon each image. Occasionally the visual elements are cut and recombined through collage, but the text remains linear. Progressing through the book is a bit like walking through a chapel or a conservatory whose walls are made of stained glass. At once luminous and grounded, ecstatic and serene, these untitled poems seem dimensionally larger than the space they occupy on the page. This format is easily able to contain and convey the complex information hastain desires to present to reader-viewers. Often, this involves the evocation of spiritual themes through earth-centric imagery/text. Some pieces are aided by the presence of a narrator specifically addressing an imagined audience. For example, the poem on page 57 places the following text upon a seductive background of light and dark vegetable whorls:

Although it is by no means clear who the “I” refers to, its presence in the text places the audience closer to the author than is possible for Martone’s volume, as we will see.

Verges & Vivisections is deeply involved with the process, conditions and exigencies of “becoming human.” Becoming human entails forming a relationship with the spirit. It also demands a relation to earth, cosmos, death and sex—reconciling the body to that which operates within and without it. Flesh bodies meld with planetary bodies and are mapped onto spirit bodies, text bodies, bodies of thought and knowledge. Through processes of growth and change, we develop spiritual insight. This book is a busy, energetic place, crowded with lovers, monks, angels, shamans, animals, plants, gems, and hybrids. These act upon and influence one another in setting as varied as the players themselves, through alchemical and cosmic interactions, or through earthier cycles like menstruation or rot. In an inversion of the standard poetic use of personification, hastain often presents body as spirit, or in terms of spirit, rather than the other way around.

The question of the body, voice, and hand of the author is especially immediate for Verges & Vivisections. hastain is a trans/genderqueer poet whose work makes hir specifically trans embodiment a setting for spiritual and physical evolution. In some ways this collection shares some elements with more traditional poetries in which the presence of the poet is immediately and powerfully felt—the narrator’s “I” is one example. However, the embodied self, though present, is not emphasized. This is not a book about identity. The self in hastain’s work is plural, many-throated, difficult to contain in one pronoun. If the actual body is in flux—more malleable than often assumed—what insight does it offer the spirit? To those for whom the spirit is something eternal, the tension here can be especially compelling. 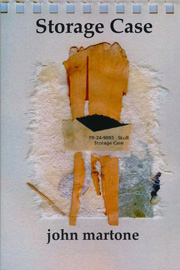 In John Martone’s Storage Case, the author’s presence is not invoked or implied through the the text. The collection is divided into three smaller books, each bearing its own dedication. In a way, the named dedicants provide the only direct, overt evidence of the author’s presence, albeit through a sort of associative back door. This presents a contrast not only with hastain’s collection but with Martone’s own text-only works—like his haiku and related forms—in which the embodied self and the poem are more intimately aligned. In those poems, we see the poet experiencing the world within a spiritual context, filtered through his own body’s movement through life and his surroundings. Yet in this volume, he himself (as a body, a narrator, or a character-surrogate for audiences) is absent. For example, in the grouping “1965/2010,” fully-identifiable fragments of pages from a copy of John Steinbeck’s Of Mice and Men are included in roughly ten of the thirty-one compositions; other fragments of the same text are also present, but these do not include identifying information such as character names or famous bits of dialogue. Although it is possible that George and Lennie are adopted surrogates for Martone and/or reader-viewers, this is only one of the more obvious ways to “read” these poems. The text fragments themselves function as elements of pictorial composition, with the toasty golden hue of the aged pulp pages glowing in counterpoint to the more basic black and white of the surrounding poem elements in that section. These warm-toned shapes also resonate with the golden Buddha statue images in later sections. The choice to read the actual words in each poem as part of the intentional whole—as elements contributing to a kind of meaning—is left to the viewer and the occasion.

In Storage Case, the question of spirit is obviously harder to answer through the coordinates of body in space and words on page. Instead the key theme here is transmission. A specific type of message might also be implied here, especially when looking at this book in the context of Martone’s full body of work. Considering the Buddhist affiinities of collections like Ksana, it is plausible to associate radio transmissions with Buddhist teachings. It is said that the full benefit of a formal Buddhist teaching is only possible through direct transmission—hearing it from the teacher. Interestingly, for those who cannot take a teaching in the physical presence of the teacher, listening to a recorded teaching is acceptable—at least, it is considered to be more effective than reading a transcript of the same teaching. Looking at Storage Case in this light gives us some insight into Martone’s particular approach. Connecting the transmission of spiritual lessons with transmission of radio messages brings up a rich array of possibilities.

This connection is made most deftly in the section titled “radiograms.” Through the appealing visual metaphor that gives this grouping its title—vintage green and yellow message forms produced by the American Radio Relay League for use by amateur “ham” radio operators—we can join Martone in a sort of “what if” game. What if Buddhist teachings were sent in code over these networks? Juxtaposing pieces of the actual forms with images (or partial images) of Buddhist statues, commentary and terminology, Martone seems to suggest what this might look like. Mixing in the “dot-dash” of electromicrographed chromosomes suggests further connections between the transmission of spiritual teachings, genetic information, and other coded messages. Here is one important link between Martone’s collection and hastain’s; the latter evokes similar associations, using a kindred multivalent poetic language.

Are we “hardwired” for spiritual growth? Is the relationship between technology, identity, body and spirit even more complex than popular thought proposes? How are we to best analyze our relationships to the technologies that have become pervasive and life-changing—from within, or without? Can a spiritually rich life be lived in harmony with both nature and technology? Where does one end and the other begin? The Internet has enabled a whole range of identity-defining media, while simultaneously nurturing several poetries that go well beyond (or sidestep entirely) the expression of identity or selfhood. Perhaps this paradox is what the Internet really is—or should be—about. And what about other “wireless” technologies: tablet computers, smartphones, wi-fi and the coded software applications that drive them? How does the body/self/spirit/technology equation play out for users of these tools when personal information and physical location are potentially available to everyone from data-mining corporations to Great-Aunt Melba? A vast conversation along these lines is ongoing, in various other poetries, and in other media and contexts. But visual poets like hastain and Martone, who can confidently engage these complexities, provide a particularly valuable and fertile segment of the discussion.