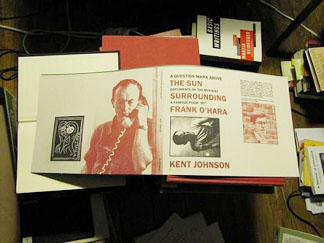 Frank O’Hara: But the sazeracs are heavenly.

FO: Yet to not speak leaves one feeling like a question mark dipped in mustard.

KK: Which reminds me. What do you think of the hubbub over A Question Mark Above the Sun: Documents on the Mystery Surrounding a Famous Poem “By” Frank O’Hara?

FO: Well, the black cover’s too nondescript, but I must say the quotation marks around “By” are worth the price of the book.

KK: You always were a sentimentalist.

FO: And the word “mystery” adds just the right touch.

KK: Did you see the Sunday Times? Great essay on the discovery of the author of the first mystery, published in 1865.

FO: I always wanted to write a mystery. And now I live in one.

KK: I hear the publisher of A Question Mark had a photo of you on the original cover, but the O’Haraistas threatened legal action.

KK: Perhaps a bit too much. All those redacted lines, in the book, from your and my poems. It looks pretty sorry.

KK: Really? It chills my balls. Looks like the CIA got their hands on the manuscript.

KK: You have to admire that Ken Johnston.

KK: Come on. Everybody knows that this Kent Johnson is really Anne Waldman.

KK: [Sound of street traffic.] Anywho, Kent Johnson’s got a lot of nerve. I’ll give him that.

FO: Nerve? For saying that there’s something a little fishy about the events surrounding “A True Account . . .”?

KK: We agreed not to talk about this. A signed compact, not to discuss the authorship . . .

KK: Or any of the circumstantial circumstances . . .

FO: Regarding the miraculous discovery . . .

FO: Look, whoever this Johnsonian fellow is . . .

FO: You have to admit he’s the only one who sniffed the funky odor clinging to the poem.

KK: You just like the way he has me wearing fluffy slippers in that taped essay-interview whatever the hell it is in the back of the book.

FO: He did nail you on that one. Note: I’m now looking down at a pair of fluffy slippers as we speak.

FO: As I see it the real mystery is why no one noticed the question marks floating over “A True Account . . .” before.

KK: Maybe they did but were afraid.

FO: Afraid of what? Offending my ghost?

KK: Yeah, and your estate, and their lawyers.

FO: And your estate, and their lawyers.

KK: And our publishers, and their lawyers.

FO: And the lawyer’s lawyers’ lawyers.

KK: I should have been an attorney in my former life.

FO: And I should have been a Gaulois.

KK: I can’t find them here. I looked at the newsstand to get you a pack, but they never have them.

FO: They always have those clove cigarettes, though. I adore the way they smell.

FO: They make me feel like I’m in a detective story written by a man with six toes.

KK: Who hasn’t washed them in two and a half weeks.

FO: He's a dogged detective, slowly piecing together the clues that can never quite explain the inexplicable.

KK: In other words, he’s a pain in the ass to those who don’t want the sanctified literary world rocked. I hope the legal threats and the nasty comments on the book only increase its sales.

FO: Look at you. The barbarian at the gate. Weren’t you just telling me something about a contract?

KK: Compact. Signed in sazerac and mojito. But don’t you think that Johnston . . .

KK: Or anyone, for that matter, has the right to say—Maybe this or that literary work could have been written by whozit?

FO: Kind of like that poem “Phone to the Poets in Moscow” by one Koichi K. O’Hara?

KK: Ouch. I can’t believe somebody found that. Still, no one can really say who wrote this “Phone” poem.

KK: Ok, ok, let’s just suppose, in a supposing sort of way, that I wrote it, the “Phone” poem. And let’s just suppose it was a tender act of friendship, of homage, and poked a little fun at all of us. But this really has nothing to do with “True Account . . .”

FO: Well, it does show that you felt inclined at times to compose in my name, or in my persona. Not that I’m Koichi K. O’Hara.

KK: Not that anyone is.

FO: And it does raise some fascinating questions about authorship. About influence. About the way a poem is regarded, and how much it depends upon the name tagged on at the end.

KK: “A True Account . . .” would be considered astounding, Frank, no matter who wrote it.

FO: Would it? What if it had been written by, oh, Don Ho.

KK: Hah! He could never have written it.

FO: Or Amy Clydesdale, of Barkwood, Montana. Or Francis Dewdrop, of Isis, Mississippi. You see what I mean? That poem might never have even gotten published. Or if it was, it would be in The Infarcted Fractal Review, and no one would ever see it, except for maybe a few of Dewdrop’s friends and family.

KK: I think you need a refill. [He can be heard saying “Waiter.”] Look, the poem is famous, or infamous, and you’ll forever be the one who gets credit--as it should be. [Someone laughing in the background.] As it should be.

KK: You mean The Furies.

FO: 4.) Why the silence by other writers and publishers when the book was threatened? 5.) Why are there so many dicks in the literary world?

KK: Oh, there are dicks everywhere, my friend. Even here. Why just this afternoon on the bus . . .

FO: And 6.) What happens if someone ever finds evidence suggesting . . .

FO: Suggesting that perhaps I am not the author of the poem with the talking sun talking in it?

KK: And even if the “evidence” was made known, no one would believe it.

FO: Or want to believe it.

FO: If you say so, Kenneth. As some poet once said: “To be rid of troubles / Of one person by turning into / Someone else.”

KK: [Glasses can be heard—probably their drinks just arrived. Someone mumbles “Thanks.”] Here’s to “A True Account of Talking to the Sun at Fire Island.” May the mystery never be uncovered.

FO: And here’s to Ken, I mean Kent, Johnson and A Question Mark Above the Sun: Documents on the Mystery Surrounding a Famous Poem “By” Frank O’Hara.

KK: May your photo one day be allowed to beautify the cover.