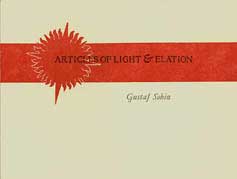 TOWARDS THE BLANCHED ALPHABETS
Talisman House ($12.95)

There are many complex reasons why some very good poets are too little known, but one of the simplest reasons for being out of the loop is geography. The American poet Gustaf Sobin is a good example; he lives in Southern France, where he emigrated in 1963 and where he married his Objectivist impulses to the lyric surrealism of Rene Char, with whom he "apprenticed." Were he stateside he might be held in the same esteem as Duncan or Creeley; from abroad, however, he is all too invisible. Two new Sobin releases should serve to remind us American readers why we need to expand the map.

Articles of Light and Elation is actually a long poem, or rather a sequence of 46 discrete poems that elaborate a single theme: the luminescence, to use one of Sobin's favorite words, of Eros. Such subject matter is rare in our cynical age, probably because to write love poetry of any worth one must battle an armada of difficulties, yet Sobin plunges in audaciously, drawing out both the mystery and the ebullience of carnal pleasure:

there where your curls
moved down over mine, my thighs
went blind, went
blond with your writhing. each
time urged, othered, mythed to
that immensity, the warp goes sleek
with so much unabated lathing.

the 'thrust of life,' you
taught me, is toward its own
astonished tissues, the heart
plucked rose out of the
cold shrubbery of so much commotion; a
nest ablaze in the breath's
abeyance.

Those "astonished tissues" themselves astonish, as do all the nouns that follow it—note especially how "heart" and "rose" are so radically recontextualized by what surrounds them—before the poem finally ends in the held-for-as-long-as-possible note of "abeyance." This is truly a poetry of light and of elation. Sobin can stand with Auden and cummings as a master of this highly daunting area, though I doubt he will be as easily co-opted by the Hollywood feel-good love machine.

Delightful as Articles of Light and Elation is, however, it gives little indication of the full range of Sobin's poetry; for that one might turn to Towards the Blanched Alphabets, his latest full-length collection. The poems here, from short lyrics to long contemplations, are electric with the urge to push language through dazzle and breath, as if through a birth canal, toward the possibility of "ideation"—even if this process risks all kinds of erasure. As Sobin says in "Premises," "words, by their very nature, fall into the shadow of their facetted parts; / by their very agreements, undergo eclipse."

It is his staring into that eclipse that makes this book so powerful, and Sobin does this in various ways. In the shorter lyrics, he tends to break language down, wielding the line as if it were a smith's hammer tempering the material:

hold, then, to each
abandoned ellipse; crouch within the
wobbling contours of so much
muffled
e-

The celebratory impulse of the lover in Articles is absent from these poems, replaced with an inquisitive and theoretically grounded discourse that conducts Wittgensteinian "philosophical investigations," coolly probing language with a knowledge-thirsty scalpel. Questions such as "for wasn't the visible—after all—our own invention?" abound, tethering all the expression in the book to this higher purpose, and Sobin's compressed language counterpoints the hugeness of this philosophical project so exquisitely that new insights glitter amidst these poems as the result.

To serve the same ends, Alphabets also contains two long poems that use very different means. "Late Bronze, Early Iron: A Journey Book" announces Sobin's poetic method right away: "plumbing sound, extracting fracture." His gaze toward the past is neither archeological nor personal but a weird hybrid of both. As such this poem literally stops time, allowing the poet to examine (and simultaneously produce) fragments—not to shore them against his own ruin a la Eliot, nor even to decode their meaning—but simply to think through them, and thus become a part of their lineage. This same approach is at work in the slightly shorter but even more magnificent "Reading Sarcophagi: An Essay," in which the poet—"reduced as you were to so much scenography"—approaches the dead text fully aware that it is a "disintegrated mirror" of his own writing.

These two books show why the expatriate American poet Gustaf Sobin is a national treasure—would that more American readers were aware of him.