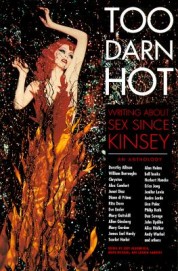 It's hard not to get personal about sex. It is even harder to be absolutely forthright about it. In 1948, Dr. Alfred Kinsey got to the heart of the matter and published the results in what has become renowned as the Kinsey Report. Since then, according to the editors of Too Darn Hot: Writing about Sex Since Kinsey, sex in America has not been the same. A collection of some of the most compelling writings on sex since the first Kinsey Report was published, Too Darn Hot attempts to cover the vast cultural shift that has occurred on different planes in America—within the feminist movement, as part of the sexual revolution, in mass media, and in our bedrooms.

From the subtle power dynamic of intimacy and attraction expressed by John Updike in "Wife-Wooing," to the direct and frightening exploration of masturbation as a ritual in the midst of violence by Dorothy Allison, to Dr. Alex Comfort's step-by-step guide to the pleasure of mild bondage, Too Darn Hot presents an excellent range of material. The editors cleverly juxtapose Lisa Palac's a women-centered pornography essay, "How Dirty Pictures Changed My Life," with an exploration of the distancing impact of pornography by Audre Lorde. They also include parts of the crass but funny "Vagina Monologues" by Eve Ensler (don't read these if you are offended by the word "cunt") and real-life personals from all over the country. The cumulative effect is a rollercoaster ride from arousal to sociological interest to disturbed sadness to laughter and back again. The reader is left with no way not to examine their own sexual experience, and no room for easy interpretation.

One of the great pleasures of this book is how it throws the doors wide open, leaving the clear sense that (with consent) everything you do in bed (or out) is good and beyond shame. The writings in Too Darn Hot are informative and freeing, yet they hint that the struggle toward a sexually expressive culture is hardly over. Even after the sexual revolution and the frank discussions about sex that have accompanied the AIDS epidemic, the fact remains that we as a culture view sex with shame and fear—a condition far from being resolved.How this shame impacts women especially is raged against in Too Darn Hot, and has been nicely explored in Naomi Wolfe's recent book Promiscuities, for one, where she argues that women of her generation learned about being sexual but not about experiencing ecstasy—and that that limitation is being passed to the next generation. Joining the fray is Martha Roth with her new book Arousal: Bodies and Pleasures, a scholarly yet personal essay on the enjoyment of sexual pleasure for women in America, specifically an America impacted by Freudian analysis.

Arousal describes a culture of violent sexuality and self-hatred—from a creepy algebra teacher with wandering hands, to cartoonist Crumb's images of a woman who starts out a sexual object without a head and becomes the vengeful Devil Woman when she becomes whole. More importantly, perhaps, Roth describes how real images of women's sexual experience are missing from the culture.

A discussion of Freud's ideas about the "mature" sexuality of the vagina versus the "immature" sexuality of the clitoris nicely frames her argument. Here the male sexual experience of orgasm through intercourse is the absolute truth, while women wait to get off through the same intercourse and wonder what is wrong with them when they don't. Clitoral pleasure is considered "excessive" (equate with shameful). Obviously, this penis-centered world view leaves out quite a bit of sexual experience. A fascinating, and funny, section on penis envy in which Roth states flatly, "it's now clear that anxiety about male organs—their size, their presence, and the possibility of their loss—belongs mainly to men," succinctly drives the point home.

In her attempt to "clear another path for desire," Roth argues that as a culture we will remain constrained until a sort of "autonomous sexuality" can be developed, an idea reinforced in many of the writings in Too Darn Hot. This autonomy simply means that every person is responsible for their own sexual pleasure—turning the tables on the old idea that women have to wait around for men to bring them to orgasm. Rather, each partner remains interested in the other's and their own pleasure. They learn their own bodies, their own needs. They act spontaneously, outside of "scripted" roles.

Part of the power of Arousal, and part of its weakness, is its first-person narrative. It is fascinating to hear Roth's personal story, but her critique of Freud's work feels a little disrupted. Furthermore, late in the book she withdraws to a rather standard mantra: that sexual freedom can create a new world, touching the sacred. While this is a compelling argument, it does not take her point to its full conclusion. Rather it distracts the discourse, rendering the physical merely a conduit to the spiritual, when much of the truth in Arousal is about the pure physicality of sexual arousal—as an end in itself. It is here that the efforts of Arousal and Too Darn Hot meet in intent. Each, in its way, works toward an open and sexually autonomous culture. Each recognizes that only then will the sexual revolution be won.