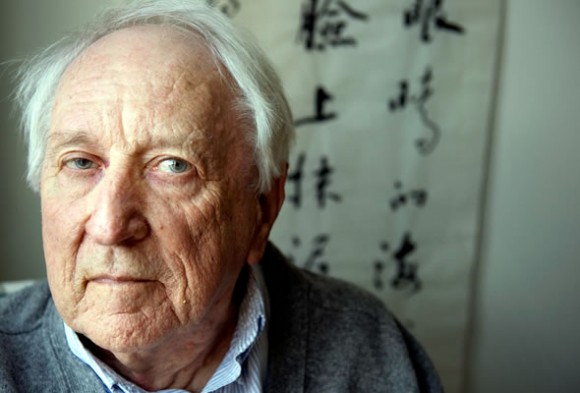 In his metaphysical essay “The Enigma of Edward FitzGerald,” Jorge Luis Borges (1899–1986) claims, “the poet must be prolific.” With this in mind, Swedish poet Tomas Tranströmer would not qualify as a great poet. Since his debut, 17 dikter (17 Poems) in 1954, Tranströmer has published roughly 250 pages of poems, but his slender output proved to be enough to lead to one of the great literary honors of the world. It is not every year—or every decade, even—that a poet is awarded the Nobel Prize in Literature, but in 2011 it happened. What was it the Swedish Academy awarded, then?

Tranströmer’s poetry is bare, elegant, precise, and serene, much like the verse of Saigyo (1118–1190), Basho (1644–1694), and Ryokan (1758–1831). And just like in the poetry of these three Japanese masters, nature is important to Tranströmer. Nature, of course, uses many different dresses—be it the gently melancholy of the Swedish summer, or that country’s stern and majestic winter—but its underlying essence remains the same, namely: it is.

Tranströmer belongs to a Germanic tribe that has been where it now is for at least 5000 years—only a few European tribes have remained true to their land for so long—and this has created a close and intimate relationship between the Swedes and their land. Swedes tend, generally speaking, to be children of nature; when English hymns are translated to Swedish they sometimes become hymns to nature instead of to God. Then again, it is not much of a stretch to claim that God can be found in nature. In Hebrew, God is known as Ehyeh (I am) and YHWH, two words that both have their roots in the copulative verb hayah, “to be.” It is safe to say that the Christianity of the North European countries is firmly rooted in this Jewish notion, for Jesus himself repeatedly uses the name Ehyeh.

Den stora gåtan (The Great Enigma, 2004) is Tranströmer’s latest collection; the poems appear to be about the wonder of existence, and they display gratefulness for what life has given and continues to offer. In The Great Enigma, the presence of God is more obvious thanever before, but the poet is not preachy—all he is saying is that he, even as death is drawing near, is deeply thankful for being part of being.

But the existence of God can be palpable in Tranströmer’s earlier verse, too. In “Svenska hus ensligt belägna” (“Solitary Swedish Houses,” 1958), the poet pleads that mankind “without worries feel / the camouflaged wings / and God’s energy / coiled up in the darkness.” God calls out from the depth, “Liberate me! Liberate yourself!” (“Inomhuset är oändligt” [“The Indoors Is Endless,” 1989]), and in “Guldstekel” (“GoldenWasp,” 1989), it is stated that the divine touches a human and then withdraws. Why is that? Tranströmer asks.

It is, however, more common that God—or at least religion—is hinted at: churches and

cathedrals are frequent images, and there are crosses, angels, icons, and statues of saints. In “Balakirevs dröm” (“Balakirev’s Dream,” 1958), the Balakirev of the poem tells a sailor, “cross yourself like me, cross yourself!” Another poem, “I det fria” (“In the Open,” 1966), describes how the shadow of a low-flying airplane casts a cross-shaped shadow over a meadow, and for a brief moment a man is in the midst of the cross. The image sends the thoughts of the observer elsewhere, as he recalls the cross under cool church vaults—“it sometimes resembles a momentary image / of something in swift motion.” “Många steg” (“Many Steps,” 1983) tells the tale of icons that, face up, have been buried in the soil, whereupon “ten thousand doubters’ heavy steps” walk over them, and suddenly the teller of the tale is underground himself: “What a strong longing! What an idiotic hope! / And over me the steps of millions of doubters.”

And then there is the graveyard, Jewish or Christian, even though the latter may have a strong secular touch, as Tranströmer, after all, is Swedish. Those who are dead and buried tend, for now at least, to be just that—dead and buried. They are not resting or waiting for the resurrection—they are dead. Unless they are undead, for in “Från vintern 1947” (“From the Winter of 1947,” 1978), Tranströmer says: “I read the books of glass but saw only the other / the stains seeping through the wallpaper. / It was the living dead / who wanted to have their portraits painted!”

To say that death and the dead are obsessions of Tranströmer would be an exaggeration, but the presence of death can often be felt and observed in his poetry. Does the poet fear death? In “Snö faller” (

Death is active and takes the measure of man (“Svarta vykort” ["Black Postcards,” 1983]), and even though the dead usually are passive, their very passivity speaks volumes. They are not going anywhere, and they do not actively intervene with the world of the living, but theyhave a lot to say, as they speak from a destination that no living creature can avoid. Is it the final destination? No one knows, but in “Svar på brev” (“Answers to Letters,” 1983), Tranströmer speaks of a place, possibly New York City, which is beyond death:

Sometime I will reply. Once when I am dead and finally will be allowed to concentrate. Or at least so far away from here that I can find myself again. When I, newly arrived, walk in the big city, on 125th Street, in the wind on the street of dancing garbage. I who love to wander and disappear in the crowd, a letter T in the everlasting mass of text.