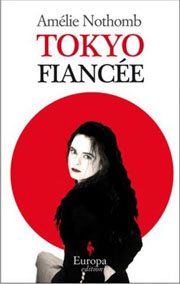 The protagonist of Amélie Nothomb’s Tokyo Fiancée does not believe in love. Twenty-three-year-old Amélie—who shares a first name and many other traits with the novel’s author—was born in Japan to Belgian parents, and has recently taken up residence there for the first time since childhood. She teaches French for a living, and tumbles unexpectedly into a fling with a student named Rinri, the Mercedes-driving scion of a wealthy Tokyo family. For Amélie, their affair is great fun, but nothing more than a lark; for Rinri, an unreconstituted romantic, it is very serious business indeed. Someone is bound to get hurt.

Nothomb wisely does not portray Rinri as a deluded, mooning type; he acts like an adult, and treats Amélie with respect. But because the object of his desire isn’t especially interested in love, his attempts to please her routinely misfire. When he serenades her under a cherry tree, she laughs at him outright. “I believe what I am singing,” he protests, but his earnestness gets him nowhere. “These budding blossoms were dangerous,” Amélie narrates with wry, affectionate disapproval, “exalting the young man’s sentimentalism in this way.”

Readers may wince at the way Amélie treats Rinri—who is kind, sensitive, and the more sympathetic character by far. Fortunately, Nothomb imbues Amélie’s first-person narration with an abundance of prickly charm; she’s quick-witted and funny even as she condescends toward Rinri, and it is difficult not to like her for her sharpness and humor. Nothomb also has the sense to give Amélie a driving, motivating passion: she loves her personal independence dearly, and throughout Tokyo Fiancée she defends it with a fierce, unrelenting, and appealing energy.

Poor Rinri just has the misfortune to be caught in the crossfire. Amélie has a restless spirit, a hunger for experience, and a desire to see as much of the world as she can, and thus needs to remain unfettered by any kind of emotional commitment. “I am twenty-three years old and I have yet to find any of the things I am looking for,” she explains. “That is why I like life. It is a good thing, at the age of twenty-three, not yet to have found your way.” It’s hard to argue with that.

Aside from conflicts between romance and personal freedom, Nothomb’s other major concern in Tokyo Fiancée is intercultural communication. Amélie, a language teacher and writer, often muses at length about what might be lost in translation when she and Rinri attempt to communicate with each other in both French and Japanese. But Amélie is often a surprisingly poor cultural observer; few readers will be surprised to discover that the Japanese have a particular fondness for high-tech gizmos, or that Japanese tourists often travel in groups and take lots of pictures. It’s possible that Nothomb intends for Amélie’s observations to come off as a bit shallow, because Amélie is in some ways shallow herself. But in a novel in which the protagonist is rather conspicuously named after its author, sorting out the difference between narrative and authorial perspective becomes a very complicated business.

It is relatively clear, however, that Nothomb is writing about a younger version of herself—and she leaves no doubt whatsoever that the book intends to offer a firm defense of Amélie’s efforts to maintain her independence. It is much to Nothomb’s credit, then, that she does not flinch at honestly portraying the pain Amélie inflicts upon the thoroughly likeable Rinri when she asserts her independence at his expense. Nothomb offers no false resolution of the novel’s conflict between personal freedom and emotional intimacy, and this unresolved tension makes Tokyo Fiancée convincing and compelling.