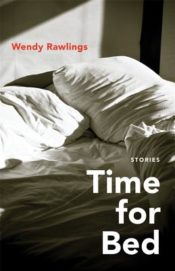 For many readers, the title of Wendy Rawlings’s new story collection will conjure contradictory sensations. Time for Bed calls to mind the dark and impenetrable wall at the end of a child’s day as well as the start of the brief reprieve parents have once the little ones are down for the night. It signals the relief of putting off one’s responsibilities until tomorrow as much as the sometimes-overlooked importance of scheduling in one’s circadian rhythms. It reminds us that we spend about a third of life in a state sufficiently deathlike, that sleeping is an activity that can be done only through surrender, and that in dreaming we live second, secondary lives only a little less unknown to us than to those intimates we deign, from time to time, to tell about them.

It is appropriate then that the stories in this collection offer such a rich study in powerful contradictions. Grief brings with it the pleasures of remembering, and it is heightened by the pleasure of connecting with others who grieve. A sense of repulsion can be a helpful companion to lust. Eating is most satisfying when the hunger that drives it hurts. The best laughter is slightly horrified. And so on.

These are themes often located in the territory of lyrical fiction. As everybody knows, “lyrical fiction” is a way of saying “fiction written in poetic sentences”; as we don’t say often enough, it also means a kind of writing aimed at creating the effect of resonance or longing. Rawlings has been established now as a lyrical writer for some time. Her previous books Come Back Irish and The Agnostics evince a devotion to the clear image and the sharp line, and they evoke a profound regard for the poignancy of living and dying. Reading these books, it can be tempting to associate Rawlings with the larger project of lyrical realism.

In Time for Bed, however, Rawlings moves in a new direction even as she relies on her considerable strengths as a crafter of sentences and images and moments. She does this by writing in comic, satiric, and even absurdist modes, which are kinds of writing that work through the production of dissonant effects. The result of this formal experimentation—of mixing the lyrical with the dissonant—is the creation of uncanny or ambiguous textures that feel true to the experience of living in 21st-century America.

At their best, these volatile cocktails deliver stories that recall the fiction of Anton Chekhov. In “Restraint,” a young law student gives herself to her passionate desire for a Vietnam veteran “older than her father,” a desire she acknowledges “is not simple”; her lust for his aged yet virile body is rooted in his identity and history as a killer. At one point, she fantasizes about him murdering her and disposing of the evidence. Later, the protagonist observes—both ironically and soberly—that “her labia are swelling over a relic.” From a lesser writer, these details would give way to gimmickry, and the story would devolve into an obnoxious exercise in erotic rubbernecking. For Rawlings, though, these features turn up and slip away in the wave of overwhelming love that carries these characters to the story’s closing pages, which manage to be beautiful, hilarious, ironic, and tragic.

Rawlings’s ability to mix the lyrical with the comic and satirical serves her exceptionally well when she writes about love and desire, and she’s able to explore the ways they simultaneously cause pleasure and pain at a variety of levels. In “Tics,” narrated from the point of view of a young woman who’s having an affair with her seventeen-year-old stepbrother, the agony of romantic experience plays out entirely in the narrator’s conflicted voice:

After we eat, we make love in the shower, where he soaps my shoulders and breasts and between my legs. “You have a nice body,” he says, as if this is a fact he’s simply reporting. No man has ever told me I have a nice body. The sex has turned me inside out, sex with a seventeen-year-old more tender and honest than sex with men my own age or even men much older. The man I dated most recently, a classical composer, was too caught up in his work to pay much attention to me. I realize Glen can give me his attention because his only responsibility is high school, which he hates.

In the collection’s most ambitious stories, Rawlings takes on absurdist conceits, raising difficult formal and aesthetic questions as she works to deliver the satisfactions readers expect from short stories. In these instances, the endings function less like conventional resolutions than like punchlines that provoke a reader to think. “BodSwapTM with Moses” posits a world where overweight white Americans rent the fitter bodies of people of color from poorer parts of the world. There are obvious risks here, and the destabilizing results of Rawlings’s frank narration are as incisive as they are surprisingly sweet. In “Again,” a young woman literally reenters her mother’s womb, not for any of the trite reasons the dime-store psychoanalyst in each of us reaches for automatically, but rather because she hopes to salve her boomer parents’ disappointments about the way their lives have turned out. In the end, her well-intended gesture simply manifests what younger readers will recognize as their everyday anxiety.

Fiction, and especially the short story, can respond to the feelings of distortion and emptiness that haunt so much of modern life. What can fiction tell us about an America where a significant chunk of the population has grown hateful and disgruntled despite enjoying the most luxurious standards of living the world has seen? How can we write or speak about beauty in a culture that often delights in its own absurdity and ugliness? I am not sure we can hope to do better than Naomi, the devastated and disoriented protagonist of “Coffins for Kids!,” who travels to the NRA headquarters after a mass shooter kills her third-grader and finds that her tragic story only reinforces the beliefs of the gun-lovers she meets. But maybe that is asking too much from art. In modern parlance, the phrase “preaching to the choir” suggests that attempts to communicate are futile, but the easy cynicism of this figure of speech disregards the temporal dimension of religious practice: The choir needs to hear the preacher (a truth not lost, incidentally, on those who fund and run the robust messaging apparatuses of American conservatism).

At any rate, the short story continues to supply companionship for the reader who seeks it. One would be well-rewarded to accept what Rawlings offers with Time for Bed.