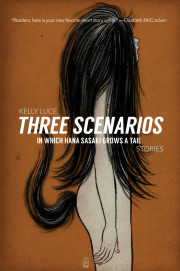 In her first collection of short stories, Kelly Luce explores, relationships, love, and death within the unique world of Japan. Her characters, Japanese and gaijin (Japanese slang for foreigner), all struggle to deal with life where tradition is slowly being pushed aside. These various viewpoints of the native and foreigner, the familiar and unfamiliar, offer well rounded stories on topics about the world’s mysteries.

Luce uses a mix of characters—a man who can hear voices, a wife who only knows how to cook gyoza, a little girl who grows a tail—and she can set a scene in just a few words, giving even the unfamiliar reader a picture of Japan that they can relate to. A Japanese festival in the story “Wisher” comes alive with just a few beautifully written sentences:

Friday, the festival’s final night, Nao joined the crowd, wearing a yukata of orange and green. The light of colored lanterns was reflected in the river in the castle moat. A late-rising persimmon moon dragged across the sky as if it, too, sought to slow down the night.

Women play a significant role in Luce’s stories; although her female characters are often at the whim of men, nature, and their emotions, the author doesn’t portray them as weak. Rather, they take control of their lives in simple ways that speak volumes. In “Pioneers,” for example, Yumi-ko prepares the dough for gyoza in the late hours of the night, but the process becomes the shap-ing of something more:

Getting the dough right took time, and she added the water drop by drop—make it too wet and the insides fell out. Her mother had told her once that the dough should feel like an earlobe. She poked and rolled and kneaded with her fingertips, palms, the backs of her hands. Sometimes she imagined it was an ear she was creating, part of an incomplete sculpture.

The title story, “Three Scenarios in Which Hana Sasaki Grows a Tail,” is situated in the mid-dle of the book, a nice break from the death that marks many of the preceding tales. This story takes a different form than the rest, with each scenario marked off by a roman numeral. In the second of these vignettes, Hana has just recovered from the chicken pox; she “clings to her mother, whimpering, worried that getting too close to a hideous, wrinkly grandma will make her ugly and old, too.” Luce creates the sincere and funny story of a child coming to under-stand, if only incorrectly, the idea of contagion.

Luce doesn’t always give the reader answers, keeping with the mysterious essence of the book, but this is a strength. This collection of stories is definitely worth reading.