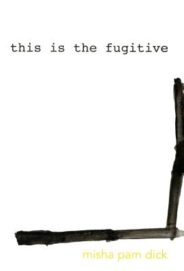 Reading means taking into the body. That’s a description deriving from practice, not a dictionary definition. Everything we’ve ever read goes inside us, but it doesn’t necessarily stay. When it does, it becomes part of the self—or selves.

This process is at the heart of Misha Pam Dick’s this is the fugitive, which overtly engages the experience of identity as fluid, as intimately linked to and even driven by the texts and authors one reads. Here, the presence of the author as reader is more than overt; the book centers the physicality of its own composition through reading.

Unexpected developments emerge when a reviewer accidentally meets an author while working on a piece about their book. I recently met Pam Dick at an event, and our conversation freed me to take my reading-through of her book into a longer, overtly subjective and self-inclusive, formally-resonant engagement with it.

Thus, in the following excerpt from the ongoing textual call-and-response between this is the fugitive and this fugitive reader, I do not describe the book or its actions; rather, I imitate its form (including its mechanics) and the process of its composition, reproducing Dick’s vulnerable process of shared becoming.

on/with this is the fugitive

we are the fugitive.

the body transformed into pages, words on pages, the self shuffled and dealt into characters, personages.

it’s how we become who we are—formed by relationships with people, places, texts, characters and their creators, ideas and their articulators.

they change us. we change them.

language functions like an organ, something akin to blood.

making love through words. when to do so with bodies is impossible.

when i met mischa/mina/minna we talked about this.

about finding/claiming others as part of ourselves even down to calling ourselves by their names.

(how close i came to naming myself after tristan tzara legally, repeating his own action in naming himself).

how overlooked the physicality of reading actually is, how it was always seen as “passive” in both my separate families, contrasted with physical work like chores or exercise, or physical play. weird, because intellectual labor was highly valued by both parents.

complicated and contradictory physicality/intimacy of reading, speaking, language itself. this book foregrounds the difficulty of processing all of the language one encounters, through reading or beyond it, and reminds me of my problems with the physical speech process (too slow for my thoughts; the logjam of integration of old/new info).

a language as a body to inhabit as well as a separate organ. “living in french” as pam dick says. more direct and somehow truer than saying “living in a french-speaking environment.” the languages one engages have a way of permeating bodies, forming thought processes, even movement. think about the variations in “obscene” gestures across cultures and languages. think about differences in meaning for a nod or a shaking head, ways of indicating direction using or avoiding use of fingers. none of that is independent of the word-language that supports it.

(this reminds me of the term “fiction suit” used to describe the body in grant morrison’s graphic narrative series the invisibles. language as culture, genetic information as language, bodies made of language creating narratives of being and doing.)

but i don’t know georg büchner. i don’t know him except through this book. i’m not sure whether or not to research him, his work, to buttress my understanding.

it could be the opposite of what i want, which is to limit the intercourse to just between me and this book, the fugitive, a pseudo-monogamy of readership and authorship. it’s pam’s georg i’m most interested in. to find a georg of my own would distract me from this.

this is the fugitive makes a link between büchner in the past and resistance movements in the present. it connects occupy, pussy riot, etc. to büchner’s life experiences with resistance. is there a useful and non-exploitative connection to make between an artist’s personal experience with trauma, exile, regime change, refugee movements, and creative engagement with those things? various experiences and uses of abjection is a key concept evolving here.

pam is asking partly about abjection as resistance, and partly about abjection against resistance. how can we usefully think about this? this enters me in several ways: deliberate choices against privilege, against consumer-driven life, against an unsustainable “day job.” being open about disability, about poverty, about outsider existence. transforming what others try to shame a person for into sources of personal strength or pride. semiotic transformation of words like “queer,” “crip,” “mad” into empowering terms. yet none of that is done without consequences, often dire ones. chosen abjection is still often a better option when constant striving for unsustainable (unattainable!) capitalist-determined achievement becomes a clear lifepath to a bad and extended death.

abjection as an externally-created condition touches on recognition of absurdity in that mechanism. but “some absurdities can kill you.” this happens in reaction to social change, that snapback punishing those who made or even wanted/benefited from positive change. (an absurdity that can and will kill people—already has, as hate crimes rise since nov. 9—and this is not just pages in a book anymore.)

further on: “therefore no triumphant homecoming. rather you return broken, speechless and in shreds.” i am so connected to this sentence it’s hard to make it unravel. i have experienced the breakdown of language in the gap between what a place meant before and what it means now. sometimes the place is a body, sometimes the place is a relationship, sometimes it’s a literal place. sometimes it’s all three, in interaction. it is an unnameable pain, a type of abjection that is difficult to repurpose to power in the moment. is there a communion of pain that doesn’t rely on communication through language?

is that empathy? “next time, his empath metaphysics. or misha’s star trek philosophy.” there are many instances of “star trek” connection in this book—references to james t. kirk, the borg, the quality of (excessive?) empathy as a sort of superpower enabling healing or a “friendlier” type of interrogation. maybe the deep excavation of another’s text is like this, a deanna troi-style soft penetration into someone’s words and thoughts. but misha (pam) is referring to büchner’s empathy and its treatment in his own texts. is there a “next time” for büchner that misha/pam witnesses, or is the reference to her own re-reading of the same text?

i am not my rhetoric but i can’t pretend distance or detachment from what i experience on and in my body.

i can’t go back—no triumphant homecoming for me either.

as pam grapples with the texts on the page and the texts of the world, so do i:

bodies living in terror and poison hiding behind names that never quite fit and words that can’t hold what they’re meant or hoped to—in any language.

“see the text slide into me, i let it slide in to me, i flow toward it and i rub on it.” these are ways of reading that don’t get written or talked about, specifically in terms of the intimacy and eroticism of reading as a physical act. some forms of readerly appropriation may be closer to the processes of mating, of eating, of interpenetrating symbiosis. we physically sustain and create each other, biologically speaking—so why disguise it when this happens with a text? this is a question driving the book as a whole:

as to attribute this writing to büchner, not to misha

but how do you distinguish it?

and like the shadow-discourse surrounding abjection, this exposure of supposedly-shameful (still-shamed) intercourse/embodiment/selfhood is itself an act of positive resistance. “so abjection hides a glimmer which is its burning secret” (76). this is the secret of every life: to embrace what was previously hidden, unknown, effaced or denied; to embrace what was or is used against us, what we have chosen, and how they all churn and tumble within us in our multitude.