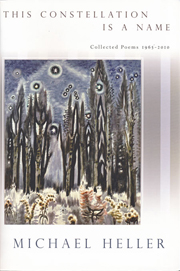 Michael Heller is a distinguished American poet in the lineage of George Oppen and Armand Schwerner. The publication of his collected poems, assembling the work of nearly half a century, gives us an opportunity to survey a career very much still in progress, one which may prove among his generation’s finest.

Heller’s poetry is exploratory in the deepest and richest sense: an always lucid and sensitive observer seeking to orient himself in the widest possible world. As the book’s title suggests, astronomical depth and figuration is a pole in this quest, but the ganglia of the stars and that of the nervous system are linked in a continuum, for “Nothing great nor small / The hollow simple is” (“Father Parmenides”), and the mirrors of science, like the human eye, both open and contract upon infinity. The swirls of the nebula are embedded in the thumbprint (“With a Telescope in the Sangre de Cristos”), and human consciousness itself functions as a crossroad of cosmic existence, “Standing in the world, / Functioning as some imperfect / Equal sign” (“Objurgations”). The equation is not static, however, but flickering, unstable, dynamic, and consequently “the horror must be let in”—that of the stellar void, and that of the human heart. This is a Rilkean sentiment, and in Heller’s poem on Rilke (one of many he addresses to illustrious predecessors), he finds the search for the world and the self to be inseparable: “That otherness we fought for / Was but this / Virulence of ourselves” (“Rilke’s Song at the Window”).

There might seem to be an element of preoccupation in this, but Heller’s interest in the daily world is equally robust, and if he sees the poet’s task as invoking the cosmos, it is no less in “Doing justice to a wall” (“The Garden”). The world, too, is history, with all its iniquities; a post-Holocaust poet, highly invested in his Jewish heritage, Heller strives, particularly in the restrained but deeply felt sequence, “Bialystok Stanzas,” to make sense of “Whole peoples . . . gone / To horror beyond remonstrance.” Heller’s politics are of the left, but in no strident or dogmatic sense; poverty—or, more accurately, privation—lacerates him when he encounters it, and he senses the betrayal of our national promise as a hardening of sensibility and spirit (“America, tranquil and monumental under / the hard moon” [“Moon Study”]). The problem of politics is also the problem of poetry: that of situating the self and its obligations in regard to the Other. Self-evidently, it is also the problem of love, and while Heller is in no sense a confessional poet, there are passages, and poems, of great lyric candor and intimacy here as well.

The advantage of a Collected Poems is that it allows us to follow a poet through the full sequence of a career, which is also to say the course of a life. As Heller puts it, with a nod to St. Augustine, “Perhaps the world, / Which does not cohere in the world, / Coheres in one self, one rememberer” (“Miami Waters”). The poet remembers for himself, but also for us, since the common experience he raises to the level of art can clarify our participation in it. “Miami Waters” is one of a series of poems in which Heller deals with the loss of his parents, and the conclusion he comes to in the twelve-part “Through the Binoculars” is, in part: “Beautiful the world the dead have left us to see.” As often in Heller, the deceptively simple statement carries the hard sting of wisdom. The world is beautiful because the dead have left it; it is the gift they bequeathe us, but also the inheritance that is not fully ours until they have quit their claim.

Heller’s later work is focused on history, and the title of his collection comes from a line in “My City,” his elegy for 9/11. New York is, among other things, the city with the world’s largest Jewish population, and the “hole in the downtown / sky” Heller sees puts him in mind of the heritage of a people whose recurrent catastrophes remind the world of evil and its “unbounded cruelty” (“The Language of the Jews”). As always, however, the particular takes Heller toward the universal, and in his recent series of ekphrastic poems, the Beckmann Variations, he finds in the visual mythology of the German Expressionist painter Max Beckmann a meditation on the self-negating aspects of power, absorbed as it is by the very symbols it engenders: “Kings bear the force of statuary. Statuary seals up the force of kings” (“The King”).

Heller writes often in long sequences, typically broken up into couplets or triplets, although this is varied by longer stanzaic forms, and, occasionally, prose poems. Throughout a work that is deeply of its time yet equipped, I think, for a long future, he repeatedly strikes the note of skepticism that is profoundly of our moment. At the end of the day, however, the poet’s response is always the same: “we are called to transfigure what we know” (“Of the Limits”). Not knowledge, but fresh creation, is the only answer we can make to mystery.