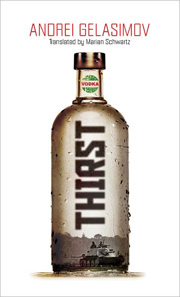 “I’m sorry to bother you again,” she said. “My Nikita’s acting up. Please help me out this once. I can’t cope with him by myself.” . . .
The little guy shuddered and stared at me as if I were a ghost. He actually dropped his blocks.

A maimed and disfigured veteran from the war with Chechnya, Konstantin might as well be a ghost, given his frightening appearance; even the police suggest he stay indoors and hide himself away lest he frighten the neighborhood. Yet he performs the scare-tactic cited above as a favor to his neighbor Olga, and the child immediately heads to bed without a word. Konstantin acts as if the ability to incite terror doesn’t bother him. Only later, when alone, does he attempt to bury himself in vodka, the only escape from his lonely life in Moscow.

Despite the vodka, however, Konstantin is still conscious of the fact that he volunteered for the war just to avoid his controlling stepfather. That decision left him with the horrific wounds and scarring, but also created a new family for him among his fellow young soldiers. Their bond, created the moment a grenade landed in their tank, erased most of his past life as an artist and abandoned son. So he gives away his mirrors, tries to forget that he was the last one pulled from the wreckage of their tank, and drinks.

Things change when one of his comrades goes missing, and the former company reunites to search for him. In between their forays around Moscow, the men recollect their war days as well as their efforts to normalize their lives in a changing Russia. In a twisted version of Robin Hood, they check on old contacts and make sure everyone has food, medicine, and most of all, vodka. Konstantin also reconnects with his biological father and his new family, finding himself determined to dislike them but unable to do so:

I looked at them and thought, Why have things worked out for me this way? Why do some burn up and others get carried out? Why did other children end up getting the father I had? . . .
Actually, all this was probably too much for a single “why.” One question mark was obviously not going to cover it.

Complicating the search is the mysterious disappearance of a large sum of money, money that might be linked to events during the war. So while the men generously play good Samaritans, tension builds as their suspicions about each other are revealed in fragments loosened by the ever-present vodka. Konstantin is forced to accept that all his past memories may not be accurate, which requires him to reassess his future. This prompts him to return to his artistic roots, and in doing so, he comes to a new realization about the war and his friends.

Andrei Gelasimov writes lean prose, and the pace never slows. The plot of Thirst is fairly simple, essentially a Moscow road trip, but the complicated and secretive characters are cunningly revealed in each step of their quest. Never asking for pity, Konstantin makes it clear that not all scars are visible and that his identity is not found merely in his reflection.