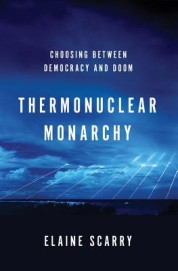 There is a plan in place, if not for you. Snuggled into the spine at the upper tip of the Blue Ridge Mountain chain, the heavy hammer of the U.S. military has constructed a Pleiades of operational complexes and underground bunkers. They lie in wait to ensure the continuity of the U.S. government in case of nuclear war. Yet, even in their immense size (one holds three-story buildings and a lake large enough for water-skiing), what small percentage of the population could they shelter? All three governmental branches? The Pentagon or some battalions? Even if the maximum number of federal lawmakers could escape there in safety, whom exactly would they govern?

The Swiss, for one, don't see things the same way. They have built a shelter system based on three assumptions: 1) war's primary victims are civilians; 2) a sturdy shelter system can save people; and, perhaps most importantly, 3) democracies must guarantee an equality of survival. At present, Switzerland has enough shelter space for 114% of its population.

The stark contrast of these two emergency plans—not in vague “democratic” rhetoric, but with working boots on the ground policy of who will be saved and who puts together the plan—is the hard nut to be cracked in Elaine Scarry's new book, Thermonuclear Monarchy. In it she argues that since the dawn of the nuclear age, the U.S. has stumbled away from its democratic ideals into those more monarchic, a term she uses “not merely as an expression of disapproval but as a literal designation of the form of government that results when constitutional arrangements (the just distribution of authority and risk) are dismantled.”

Scarry further argues that the Constitution provides for just distribution of military authority. The Second Amendment, so often viewed in terms of private and free ownership of guns, came into being "primarily as a way of dispersing military power across the entire population.” We may no longer live in a society where a phalanx of farmers will grab their muskets and in a minute's time be fending off foreign invaders, yet under the Second Amendment, we as citizens are the fighters in war. By taking up arms we agree to engage in injuring power (as well as the risk of being injured in return).

In a nuclear scenario, only a small group of people control the injuring power. With so few fingers on the buttons, such power is not disbursed; there is little dialogue or chance to show dissent. And this is important, because a refusal to take up weapons is to clog the system, to impede war's forward march. This possibility is the very genius of the U. S. Constitution: the right to bear arms is also the right not to. Here, Scarry argues, nuclear war is simply unconstitutional.

Since her first book, The Body in Pain (Oxford University Press, 1985), Scarry has charted brave new territory—sometimes heady and abstract—exploring criminal action by states and individuals. Yet in this hefty book she is aiming at a more general readership, putting aside much of her previous philosophical abstraction. Any random thirty pages still elicits an  "I've never thought about that in such a way” response; she has a brilliant mind and true moral compass.

Impressively, Scarry is committing her vibrant intellectual energy to something very difficult, something that has failed at the UN and at international courts of justice: she wishes to dismantle the nuclear regime of the U.S. Perhaps more importantly, she seeks to encourage the will of U.S. citizens to change the plans in place, asking us to reach back to an argument set forth by Alexander Hamilton in 1787:  "It seems to have been reserved to the people of this country to decide the important question, whether societies of men are really capable or not of establishing good government from reflection and choice, or whether they are forever destined to depend for their political constitutions on accident and force.”