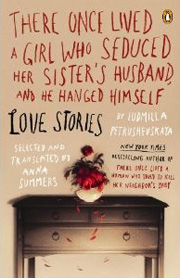 After having been blacklisted by the Soviet authorities for two decades, Ludmila Petrushevskaya is now considered one of the major contemporary Russian writers. In 2009 Penguin Books published her collectionThere Once Lived a Woman Who Tried to Kill Her Neighbor’s Baby (translated by Keith Gessen and Anna Summers), followed now by the newly-released There Once Lived a Girl Who Seduced Her Sister’s Husband, and He Hanged Himself (translated by Anna Summers).

While the stories in the first collection are packaged by the publisher as “scary fairy tales” (although the stories themselves, uncanny and fairy tale-like, are not exactly “scary”), the stories in the new collection are categorized as “love stories.” These stories are so realist, so stripped of any artifice and naked in their laconic descriptions, that they seem to transgress realism. Though the reality described is very familiar for anyone who lived under communism, the stories may seem surreal for an American, so, once translated, they acquire a new frame: that of the strangely familiar. The common thread in most of them is the quest for private space—something virtually nonexistent in communist Soviet Union where apartments were shared by more than one family, with communal kitchens and the bathroom in the hall where tenants waited in long lines. Under these circumstances, a room where two lovers can privately meet becomes a golden fleece at the center of most conflicts and dramas. This is how the first story, “A Murky Fate,” begins: “This is what happened. An unmarried woman in her thirties implored her mother to leave their studio apartment for a night so she could bring a lover.” The raw simplicity and the oral style—as if a neighbor told the story to another one over a cup of coffee—are Petrushevskaya’s trademark.

In Petrushevskaya’s stories, a romance may start while waiting in line—a daily activity shared, together with drinking, by most citizens under communism. People get married simply because one happens to own an apartment, and children are conceived because a lucky couple chances upon an empty mattress, and how could one not take advantage of such an opportunity? These stories are as literal as it gets, and yet, maybe because they touch in us some universal chord, they are fables. A married woman “moves like an amoeba, without direction, her goal simply to dodge her husband’s blows”; an older woman, who calls her husband Clapper (after he’d given her gonorrhea years ago, and then claimed he’d gotten it from her), inherits unexpectedly an apartment, and leaves her lifelong husband, but still comes back to feed and shave him. This is romance Russian-style, “tough love” in its most literal sense, yet somehow, its bleakness is more satisfying in its humanity and aesthetic simplicity than the sugary appeal of so many popular love stories.