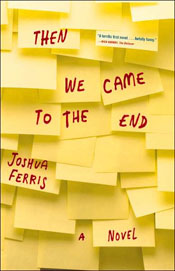 Joshua Ferris’s debut novel, Then We Came to the End, is a uniquely concentrated expression of what it feels like to work in an office. The book abjures a protagonist, instead relying on a nebulous group of advertising agency employees that narrates the novel in first-person plural and that seems to shift in number depending on who happens to be in the room or who has been fired recently. Ferris’s choice of personal pronoun might sound gimmicky, but it works; without an Almighty dictating in the third person or a familiarly human first-person voice, the book feels as lonely as the lunch hour of one of its characters, Carl Garbedian, who stays at his desk eating takeout penne alla vodka while all his co-workers go out to lunch together.

Most of the action takes place in 2001, that ominous year. The nationwide downturn seems remote to these characters until it walks into their office and makes itself comfortable. “The austerity measures began in the lobby, with the flowers and bowls of candy,” Ferris writes. Everyone has a different reaction to the mass layoffs that ensue, and as we get to know the office and its personalities, a profound melancholy sets in and deepens with each inevitable departure. When Jim Jeffers’s time comes, for example, his co-workers go “down to his cubicle, miserable with happiness that he had been chosen over us. Everyone who had spoken ill of him at one time or another was there to offer him condolences. Jim’s reaction was magnanimous and pathetic at once.”

Ferris, who once worked at an ad agency, nails the details of working life that hover just below consciousness: the procession of co-workers, who seem tender in their individuality compared with corporate culture’s surgical sterility: the petty jealousies, as when a fellow worker gets praised (“It was disgusting to look over and see Karen’s face just then”); and the distortion of time, given shape when someone can’t remember whether a certain incident happened yesterday or today: “It wasn’t as absurd a notion as it might sound. Some days, time passed way too slowly, other days far too quickly, so that what happened in the morning could seem like eons ago while what took place six months earlier was as fresh in our minds as if an hour had yet to pass.”

One of the many wonders of this book is that despite the specificity of its subject, its perspective is huge. Characters die too young, die old and lonely, deal with mental illness and grief. Ferris could have been content to hinge the novel on his clever choices of narrators and setting, but he big-heartedly takes on the humanity that sprouts up everywhere, even in an office. Furthermore, while Ferris’s writing can be clunky, it’s the clunkiness of discovery. America has a tradition of work-related fiction, from Melville’s Bartleby the Scrivener on down, but it’s always been about hating work and trying to gather up the courage to quit. What of the majority, the people for whom work can be a drag but isn’t one of life’s tragedies? Ferris speaks for them—and the literature of work receives an update long overdue.